Can You Use a Superlative of Two?

Explaining the "best" of two

Bigger means that one thing is larger in size than another, and biggest refers to the largest of its category, but what if the category consists of only two things? Some people say that “the bigger of the two” is preferable, but that choice depends on logic rather than grammar. There is also nothing wrong with calling the larger of two similar things the “biggest.”

If you want to use an adjective in English, there are a number of ways this may be done. 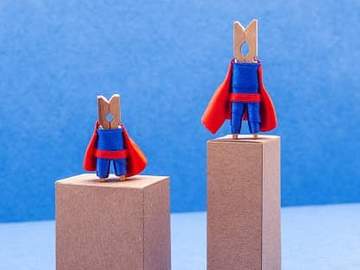 This may seem like a simple enough matter, but, as is so often the case when we look a little closer, someone has found a way to make it less simple. For instance, there is the question of whether one can use the superlative form of an adjective in reference to a group of two things (the superlative two!), or whether this usage necessitates three or more options.

Does the Superlative Need Three Options?

This is an issue because in the second half of the 18th century some grammarians decided that it was unwholesome to use the superlative two; they concluded that one should say that something was the better of the two, and not the best. The first author to warn against such use (Joseph Priestley) allowed that it wasn’t that big a deal (“a very pardonable oversight”), but by the end of the 18th century this idea was being written about as a rule, rather than a suggestion. The fact that using superlatives of two was something that was quite common in English at that point, and had been for over a hundred years, seemed to matter little, if at all, to these grammarians.

We both doe burne alike
and frie with egall flame:
But I am weakest of the two,
my nature willes the same.
— George Tuberville, The Heroycall Epistles Of the Learned Poet Publius Ouidius Naso, In Englishe Verse, 1567

Let him also be of good colour, of good courage, wel made: and aboue all things, sée he be sound, and well marked, and that he be gentle, and of an approoued durablenesse in trauel: and as touching his colour, there is none euill that hath all his outward partes blacke, that is to say, his legges, taile, and mane, tippes of eares, and his mouzel: nor none good that hath all his bodie of one colour, save the blacke and white: but the blacke is the best of the two colours last named.
— Christopher Clifford, The schoole of horsmanship, 1585

Also when a goate hath kydded, yee shall reserue the most fayrest and strongest of the two: (If that she haue two at a birth.)
— Leonard Mascall, The first booke of cattell, 1587

In spite of continuous and widespread use, and occasional protests by people who studied language, the prohibition on the superlative of two has remained something that usage guides warn against. Our Dictionary of English Usage refers to this as “a perfect shibboleth, serving no practical function except to separate those who observe the rule from those who do not.”

You may, if you wish, refer to something as the best of the pair, rather than the better, and rest secure in the knowledge that the only rules you are violating are those of usage (read: opinions), and not of grammar (the structure of the language). Bear in mind that this use will quite possibly annoy some portion of your audience, but it doesn't hurt to go with the option that you think works best.