Can You Really 'Grow' the Economy?

Grow has a long history of usage peeves.

Grammar and usage peeves, much like the meanings of words, shift and change in curious and unpredictable ways. Some, such as the notion that one should not end a sentence with a preposition, endure for hundreds of years, in spite of the fact that they are rather useless and nonsensical. Others, such as the mid-20th century idea that balding was not a proper word, have a short life and then are forgotten. Sometimes a word will escape from one usage quibble and become accepted as standardized English, only to find that another quibble has taken the place of the first one. Meet grow. 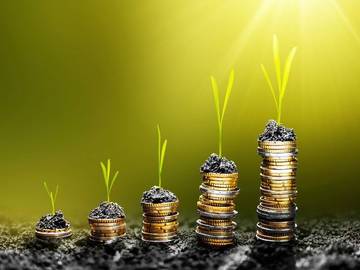 We cannot recommend this photo as a viable financial strategy.

In the late 19th century the hot new peeve with all the cool grammarians was the use of grow to refer to something that was not getting larger in some manner of size. Note to reader: the words hot, cool, and grammarian, as used in the previous sentence, are all highly subjective, and should not be taken seriously. In any event, Richard Grant White, a notorious scold of the time, didn’t like it when grow was used to indicate that something was becoming smaller. However, we have been using the word grow to mean “to become” since the 15th century, and we’ve been using it to in reference to diminution, rather than enlargement, since at least the early 16th.

And we se, that ther of slownesse is taken, and the childrens personages do waxe vncomly, and growe lesse in stature.
— Thomas Elyot, The Boke Named the Gouernour, 1537

The prohibition against using grow smaller (or similar uses) stuck around for a number of decades, but as the 20th century wore on an increasing number of grammarians came to accept it. But rather than simply fade away and enter the dim realm of ‘words which we used to complain about but now can’t quite remember why,’ grow instead pirouetted neatly and found a new way to annoy people.

Ghastly. Intolerable. Queen forced to use "grow" as a transitive verb. Tory victory. #QueensSpeech Best place to "grow a business"

Nowadays the hot new peeve among grammarians is the idea that grow should not be used as a transitive verb (note: please observe the same semantic caveats as earlier). One slight issue with this is that the Oxford English Dictionary informs us that grow has functioned as a transitive verb for well over 500 years now. Happily, as always, Twitter has an answer.

Can we stop using 'grow' as a transitive verb for things that are not plants.

@lkkinetic I like attriting-sounds Catholic & rhymes w/ smiting. But there will be no transitive "growing" unless hair or crops are involved

So according to adherents of this new peeve, Modern English will allow grow to be used as a transitive verb, but only for plants or hair. Except that certain technical fields, such as crystallography, have been using the transitive grow since the early 20th century.

In cases where such further work is impossible, on account of inability to obtain or grow crystals of adequate size, this microscopic investigation is invaluable.
— A. E. H. Tutton, Crystallography and Practical Crystal Measurement, 1911

The current iteration of this peeve appears to have originated largely as a result of Bill Clinton’s use of “grow the economy,” when he was campaigning for president in 1991. However, Clinton was merely popularizing a term which was already part of the economic jargon at that time. In 1988 the president of the Federal Reserve Bank of Cleveland, W. Lee Hoskins, was quoted in The Cleveland Plain Dealer using the economically transitive grow:

”If we don’t grow the economy fast enough to pay the foreign creditors in terms of goods and services, out living standard would suffer,” he said.
—The Cleveland Plain Dealer, 12 Jan. 1988

It is perfectly reasonable to dislike the sound of certain word combinations (such as ‘grow the economy,’ or ‘grow a business’). And it would be fascinating if we could assign this degree of specificity to other transitive verbs (‘expand may be used as a transitive verb, but only when referring to waistlines. And green raincoats.’) But attempting to prohibit all transitive use of a verb based on the dislike of some uses of it is not the most practical approach. You don’t have to like, or even abide, transitive grow. But you should admit that it exists, and at this point you can probably stop blaming Bill Clinton for it.