Can 'Reticent' Be Used to Mean 'Reluctant'?

We're not at all reticent to tell you it can

'Reticent' can be used to mean both “inclined to be silent or uncommunicative in speech” or “reluctant.” While some find the “reluctant” sense inelegant, it has been in widespread use for a number of decades.

The oldest meaning of reticent (and one that is still in use) is “inclined to be silent or uncommunicative in speech.” The word is a Latin borrowing of the early 1800s (it comes from reticēre, meaning "to keep silent”). It was used by the likes of George Eliot and Ralph Waldo Emerson to describe those reserved folk who keep mum when others might yammer on—or even just mutter a word or two—about something. 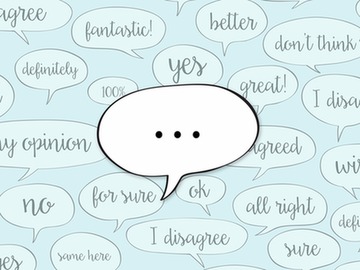 While 'reticent' originally meant "inclined to be silent," it can now also be used as a synonym for 'reluctant'—most often in the case of reluctant communication.

Within 50 years, the word had started to develop a broader meaning. Instead of just describing those who are reluctant to speak, it was being used to describe those who are just plain reluctant. Usually, though, the idea being communicated was the same as with the original use: phrases like "reticent to give information" and "reticent about speaking of it" maintained the "inclined not to talk" meaning.

Reticent meaning "hesitant" or "reluctant" is most frequently followed by "to" and a verb. In the early part of the 20th century reticent to wasn't all that common, and when it was used it was followed by verbs that preserved that original "inclined not to talk" meaning, like discuss and talk. Or it was followed by no verb at all, as in phrases like "reticent to a fault" or "reticent to us." But as the 20th century wore on, the use of reticent to mean "hesitant" increased, and by the 1940s reticent to was increasingly being followed by verbs like accept, participate, and commit. While some usage critics find this “reluctant” sense of reticent objectionable it is in widespread use in edited and published writing.

One of the strangest aspects of intelligent humans is that we are very reticent to accept easy answers to big questions.
— David McWilliams, Irish Times, 14 Mar. 2020

Cone also recalled the time James spoke up in class during a discussion about why non-Black midshipmen were reticent to participate in the Midshipmen Black Studies Club.
— Bill Wagner, The Baltimore Sun, 4 Jul. 2021

Some other critics say DeSantis is not doing enough to help other Republicans and has been reticent to commit to fundraising or political events that don't benefit him, even as his national star rises.
— Tim Craig & Josh Dawsey, The Washington Post, 27 Feb. 2022

Another note: reticent developed another meaning around the same time as the "reluctant" one: "restrained in expression, presentation, or appearance.” This sense is fully established, and it doesn't seem to bother anyone. Some people like to use it to describe wines that haven't matured enough to speak their full aromatic minds yet.

Mira Pinot Noir Napa Valley Hyde Vineyard 2016 ($90). This is a deep, rich pinot noir with cherry and cranberry flavors and a hint of spice in the finish. Big and a bit reticent, but it should age well.
— Tom Marquadt & Patrick Darr, Capital (Annapolis, MD), 27 Jul. 2022