Or must it only mean 'to devote oneself to the Muses'?

Many people turn to a dictionary in order to discover something about a word. Others will use this reference work in order that they might help another person gain knowledge (by which we mean "it is used to prove to a husband/wife/co-worker, etc. that they are wrong"). And still others will see a dictionary and think “I could spend some time telling the people who wrote this book that they are wrong, and I am right.” 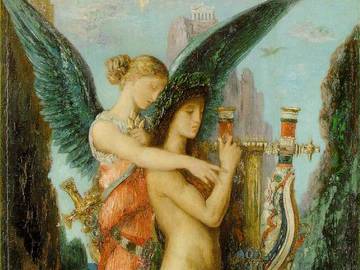 Portrait of a bemused youth. In the early 18th century, 'bemused' was used to describe people "devoted to the Muses."

For instance, we offer the following definition as one of the possible meanings of the word bemuse: “to cause to have feelings of wry or tolerant amusement.” This definition prompted someone to drop us a note:

This definition is incorrect. The word has nothing to do with amusement. It is a synonym of confused, as in the sentence "I am bemused as to why a professed dictionary would have an incorrect definition.”

The reason why we have this definition is that it is an accurate reflection of the way that people use bemuse. It is often paired with the adverb wryly, which makes sense when modifying the “amused” sense (but would not make much sense if it were modifying the “confused” sense of the word).

How should we feel now that streaking has hit home? Wryly bemused, of course.
—The Bridgeport Post (Bridgeport, CT), 8 Mar. 1974

Full of a lilting, foxy-Grandpa sense of self-mockery, his voice seems to do a little soft-shoe dance through every word, pausing here and there to make sure that he and his audience are still on the same, wryly bemused wavelength.
—Larry Kart, The Chicago Tribune, 22 Jul. 1984

Sometimes Vidal's impulse to be "devastating" rather than complicatedly truthful brings out an unattractive side of a critical voice that is otherwise mainly, in Parini's words, "knowing, urbane, and wryly bemused.”
—William Pritchard, The Boston Globe, 11 Oct. 2015

There is a good deal of confusion (or bemusement, if you prefer) about the original meaning of bemuse. A number of 18th- and 19th-century dictionaries assigned the “bewilder” sense to this word after reading a line by the poet Alexander Pope written in 1735, in which he referred to “a parson much bemus’d in beer.” Some dictionaries also took note of the fact that several decades earlier (in a letter from 1705), Pope had used the word in a different sense, meaning “devoted to the Muses.” For a good deal of time it was assumed that Pope had used the word jocularly in 1705 (referring to the Muses), and then again in 1735 (referring to being confused).

It now appears likely that Pope was using the word to refer to Muses in both occasions. And recent research has shown that he was not the first person to use this word; there are a number of instances of bemused which occur before 1705, and they all are in reference to poets.

For other Sins they feel Remorse sometimes,
But sure no Poet e're had Qualms for Rhimes;
Alas! no wholesom Counsel can be us'd
By a poor harden'd Wretch, when once Bemus'd:
Then don't inhumanly your Pains mis-spend
On Reprobates, that you can never mend.
—Fr. Knapp, The Annual Miscellany, 1694

This, Lausus, was a brave, and noble Stroke;
The most Bemus’d could not have loftier spoke;
—Plain Right Down Lover of Truth and Honesty, Nine Satyrs, or Moral Poems, 1703

So it seems possible that bemuse has taken on more than one "mistaken" definition. The “amused” sense came about from many people confusing the word with amuse, and the “confused, befuddled” sense came from a series of dictionaries misreading Alexander Pope. This has been your daily glimpse inside the sausage-factory of semantic change.

(You can use the word bemused to mean "wryly amused," but you should be aware that some people will think less of you for doing so.)