Can a Single Person Be a 'Troop'?

Many people are confused about this word

Among the many troubling questions that come about from the bountiful illogic of the English language, few engender more confusion and disagreement than the simple query “can a single person be a troop?” 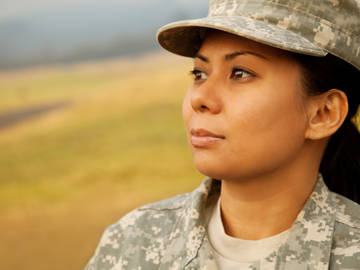 Usage commentators don't agree on the correct usage of 'troop'—some feel that 'troop' can only describe a large number, whereas others hold that any number of people can be described as 'troops', provided there are at least two. However, using 'troop' to refer to a single person is almost universally frowned upon.

Here are some of the ways that troop may be used, numerically speaking:

In the same month of July Count Frontenac, Governor of Canada, invaded the Indian country belonging to New York Government with two thousand troops.
—Roger Wright, letter to the Duke of Bolton, 24 Nov. 1696

Can the actual Possession and entire Sovereignty of so large a Tract of Territory, which will produce at least above half a Million a year, and support thirty thousand Troops, be justly call’d no considerable Acquisition to France, or said not to make the Greatness of the House of Bourbon a Whit more formidable to Europe?
—Some Observations on the Present Plan of Peace, 1736

The Saxon Duke came lately to our Aid,
With many thousand Troops, a mighty Force,
Of Men well skill’d in Arms, of Brav’ry try’d….
—The Dictionary Historical and Critical of Mr. Peter Bayle, 1735

This is where the trouble comes from. After all, if you can have one thousand members of cavalry and call them “1000 troops” wouldn’t taking 999 of them away leave you with “1 troop”? Most usage guides agree that calling a single person a troop does not quite pass muster, but there is disagreement as to how the word may be used in its plural sense. Some sources, such as the Associated Press, feel that troops is appropriately used to refer to groups of individuals only when there is a large number of them. Others, such as Bryan Garner, hold that any number of people can be referred to as troops, so long as there are at least two.

But when the plural appears with a large number, it is understood to mean individuals: There were an estimated 150,000 troops in Iraq. (But not: Three troops were injured.)
—AP Stylebook Online, 2016

In this sense, troops refers to individual soldiers

There are also concerns regarding which branch of the armed forces troops should be used in reference to. Although there are distinctions observed by some (and we do include a definition indicating that the word may refer to “a cavalry unit corresponding to an infantry company”) it is common enough to refer to armed forces or soldiers in general as troops that you will not be misunderstood should you do so.

In cases such as this, where there is a lack of agreement among commentators as to correct usage, you are well served by relying on your own ear. If it sounds reasonable to you to refer to 3 or 30,000 individuals in some branch of the armed forces as troops, then you should go ahead and do so. If you think that the word should be reserved for a certain number, or employed only as a collective noun, you are free to make this distinction as well. And if you feel the need to refer to a single soldier as a troop, you may do that as well: just be aware that while many people disagree with each other as to how troop should be used, most of them will agree that you are wrong if you do this.