No, the chickens aren't moody

What other words come to mind when you think of the word brooding? Maybe you think of the sort of words that brooding most often modifies: skies, presence, men (men appear to be considerably broodier than women), and the like. This sense of the word, defined as “moodily or sullenly thoughtful or serious,” tends to get a good deal of romantic and portentous use, so it is a bit surprising when we remember that the initial meaning of brooding was basically “sitting on eggs.” 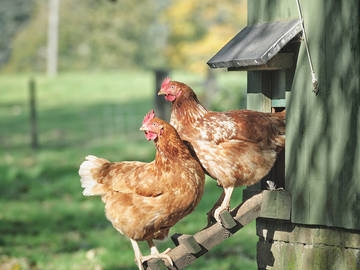 Chickens on their brooding break.

The earliest form of brood was a noun, in use now for over a thousand years, which had a small range of meanings that are still more or less current (“the young of an animal” or "the children of a family”). In the 15th century brood began to be employed as a verb, meaning “to sit on or incubate (eggs) for the purpose of hatching.” The following century saw brooding begin to be used as an adjective, and as with its predecessors, was first used in reference to chickens, and various other fowl.

And friendship is so princely and noble of condition, it may not bee ioyned with anie but such as are as honorable as it selfe. You shall see among friendes of equall calling (that are like of affection) such a sweete and common consent of fraternall loue and liking, that euery thing is wrested to the best construction, and no one matter may be ministred amisse, the mindes and manners of men, runs so mirrily together, as it were a sorte of pretie chickens, hopping hastely after the cheereful chucking, of a brooding hen.
—Thomas Churchyard, A Sparke of Frendship and Warme Goodwill, 1588

Euen as the brooding bird that sits at once,
To hatch hir egges, and huckle vp hir yonge,
Till natiue and adoptiue egges breed bones,
And all hir flocke is fledge and liuely sprong….
—Guillaume de Salluste du Bartas, The First Day of the Worldes Creation, 1595

….for as the brooding hen sitteth close vpon these serpents egs, and depriueth her selfe willingly not only of libertie, but also of food, that she may bring forth her yong….
—John Downame, The Second Part of the Christian Warfare, 1611

The adjectival form of brooding appears to have been viewed as too useful to restrict its use to birds, for by the 17th century it had already begun to take on increasingly figurative uses.

Thus th' Elements did in the Chaos fight
When jarring seedes did in her Matrix lye.
When cold with hot, when heavie with the light,
Did combate with intestine mutinie.
Till on th' Abysse a Spirit did display,
His brooding wings, and arbitrate the fray.
—Charles Aleyn, The Historie of that Wise and Fortunate Prince, 1638

'Twas full an hour e're my Muse could raise
A true expression to set out your Praise;
Which that my brooding thoughts did e're impart,
Was more my fancy then your due desert.
—Anon., An Answer to the Character of an Exchange-Wench, 1675

This adjective, and the verb forms of brood are still very much in common use among those who deal with poultry. However, most people who use these words fall outside this category, and the figurative uses of brood and brooding greatly outnumber the literal ones.

Brooding is, oddly enough, not the only word dealing with contemplation which has come from the barnyard. Ruminate (“to go over in the mind repeatedly and often casually or slowly”) came into English from the Latin ruminari, meaning “to chew the cud.” The figurative use of ruminate appears to have preceded the literal one (in English, at least), although both may still be found today.