Take a timeout for a usage article

The homophones brake and break sound identical and occupy the same parts of speech, but have very different definitions. Brake can function as a noun ("a device used to prevent the motion of something") and can also be used as a verb ("to apply a brake on a vehicle"). Break, on the other hand, is a more complex word with a wide range of possible meanings in its uses as a noun and verb: time off from school or work, an opening shot in a game of pool, to violate something (such as the law), and more. 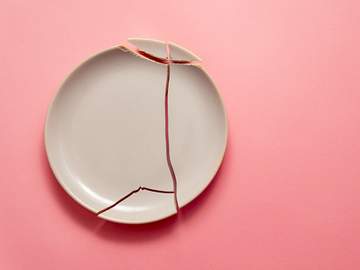 Slow down next time.

Homophones are tricky little things for many people. In some cases, as with seller & cellar, or eight & ate, the spelling differences can aid in distinguishing between them, and in others (as with beet & beat) the fact that they are different parts of speech may help. However in cases such as brake and break the two words not only sound identical, they happen to look very similar, and occupy the same parts of speech.

Meaning and Usage of 'Brake' as a Noun

Brake is frequently used in the sense of slowing or stopping movement. As a noun it has such meanings as “a device for arresting or preventing the motion of a mechanism usually by means of friction” or “something used to slow down or stop movement or activity.”

The truck driver slammed on the brakes. He'd overshot the bend.
— Dominic Chola Mulaisho, The Smoke That Thunders, 1979

Being rather a coward and less angry than he pretended, he was careful to put the brakes on, so to speak, before the two old men and his mother came in front of his target.
— Beti Mongo, King Lazarus, 1970

Meaning and Usage of 'Brake' as a Verb

When used as a verb brake carries such meanings as “to operate or manage a brake; especially, to apply the brake on a vehicle,” and “to become checked by a brake.”

Essola had not been taken by surprise when his neighbour braked so suddenly and had prepared for it by gripping his seat.
— Mongo Beti, Perpetua and the Habit of Unhappiness (trans. by John Reed & Clive Wake), 1978

She pulled over to the right, then moved out to the left, braked to let a man cross carrying a huge basket from which protruded fish heads and tails.
— Ousmane Sembène, The Last of the Empire (trans. by Adrian Adams), 1983

Meaning and Usage of 'Break' as a Noun

Break is a considerably more complex word, in terms of its possible range of meanings. The word has dozens of definitions in its uses as a noun and verb, ranging from “the opening shot in a game of pool or billiards” to “(of cream) to separate during churning into liquid and fat.” Among the more common noun senses are “a respite from work, school, or duty,” “a gap or opening caused or appearing as if caused by damage,” and “emergence from darkness.”

During supper, now a quiet affair, he announced: ‘Ginny dear, don't you think we should take a break? I mean, go away for a while?’
— Buchi Emecheta, The New Tribe, 2000

Horns hooting, engines belching, they flowed through the break in the dam which had held them back.
— Lenrie Peters, The Second Round, 1968

But I do not have the time to proceed further with this farce. I must end it before the break of dawn and the time now was after two in the morning.
— Tayeb Salih, Season of Migration to the North, 1991

Meaning and Usage of 'Break' as a Verb

As a verb, break may mean “violate, transgress” (as in break the law) or “to go through, to penetrate.” The word is also used in conjunction with wind to mean “to expel gas from the intestine.”

Their feet lifted and they were floating, two dark heads breaking the surface, their bodies pale and luminous beneath the water.
— Jane Bryce, Maria Morphopolous’s Slipper, 2007

Mr Walker thought it best to leave well alone. He knew what the Sergeant was doing: reminding him that, in fact, by keeping Lunga on his premises, technically, he was breaking the law.
— Sindiwe Magona, Push-Push! and Other Stories, 1996

Doctor Tortoise then pulled one leg inside his shell, then the other; pulled one hand in, and then the other; and at last withdrew his scaly head inside so that no part of him was visible, except the shell. Then, he broke wind like this: 'Doo-oot,' just like the blowing of a trumpet or a school bugle.
— Liyong Taban, Fixions and other stories, 1969

How to Remember Which to Use

The fact that break is so much more semantically varied provides a means for distinguishing between the words: if the meaning is concern with the slowing or stopping of a thing (in either a figurative or a literal manner) then the word you want is most likely brake. For almost all other uses, ranging from billiards to shattered glasses, think about using break.