It's a century younger than you'd expect

Though it conjures images of vigilantes in the Old West, the term bounty hunter was not in use in this context in the 1800s. The sense relating to "one who tracks down and captures outlaws" arose around the 1950s in pulp fiction and Hollywood westerns.

America loves its myths and America loves its movies, and sometimes it’s difficult to tell which came first. In the masterpiece of mythmaking that is Star Wars, George Lucas deliberately summoned up the memory in American culture of pulpy Saturday matinee movies and serials of the 1930s, 40s, and 50s, especially westerns and the early sci-fi hero Flash Gordon. He also tapped into the deeper patterns of myths seen across cultures and throughout time—the young searcher, the old master, the shadow self—as explained by Carl Jung and Joseph Campbell.

Tropes from westerns especially abound in Star Wars, like the cynical loner figure of Han Solo, introduced as a “have gun, will travel” mercenary but who becomes a hero in the third act. The holster strapped to his thigh and the shoot-‘em-up escape sequences lend an air of satisfying familiarity to the narrative, which purportedly takes place on planets in an unknown galaxy but where things like oxygen, gravity, and the use of standard English nevertheless seem to be surprisingly universal. 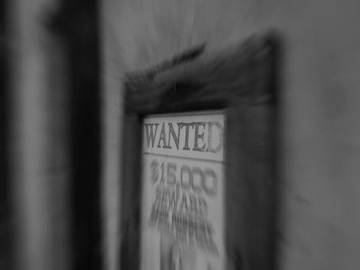 Have carbonite refrigeration unit, will travel.

Another common element in westerns is the character of the menacing bounty hunter. Clint Eastwood played several in his career, from For a Few Dollars More to Unforgiven. Henry Fonda played one in The Tin Star. The character of Rooster Cogburn in True Grit is also a bounty hunter. They can be viewed as paid vigilantes who have the authority of the law on their side, but the 1872 legal decision often cited as the ruling that permits this kind of private law enforcement never uses the term bounty hunter or even the term bounty at all—it uses the term bail instead.

Bounty originally meant “kindness” or “goodness” in English dating back to the 1300s, just as it did in its original language, French, where bonté derives from bon, meaning “good,” itself from the Latin word bonus. Bounty then came to mean “generosity” and “yield of a crop” before it began to be used to mean “reward” around 1700. Initially, this “reward” sense was used to refer to a sum of money given to recruits upon joining the British army or navy—a meaning closer to what we would today call a bonus, showing that these etymological twins overlapped in meaning and in usage. This sense was still very current during the mid-to-late-19th century in America, the period depicted in westerns:

One day last week, Deputy Marshal, M. W. Alarney, from Potter county, was passing down with a hundred volunteers, among whom were a few suspicious-looking “bounty-hunters,” whom he charged his “veteran” guard to take special charge of.
— Union County Star and Lewisburg Chronicle (Lewisburg, PA), 11 Mar. 1864

The letter which he wrote to the Massachusetts bounty hunters, who were scouring his lines to obtain negro recruits and hard money, was an excellent production of his pen, abounding in patriotism and good sense, and creditable to the writer, both as a man and a soldier.
— Jackson Citizen Patriot (Jackson, MI), 17 Jan. 1866

The man who should refuse to volunteer as a soldier because he was too good to associate with the rank and file of the army, or because he did not like the colonel or the captain, would at once be recognized and branded as a wanton coward or a mercenary bounty hunter.
— Ottawa Weekly Republic (Ottawa, KS), 9 Feb. 1888

So bounty hunter was used to mean “bonus hunter.” Did it also mean “reward hunter”? Well, sort of. The evidence we have shows that the rewards offered during this period were not for criminals on the run but for the pelts of predatory animals or dead birds:

Our own opinion is that there is either an extensive wolf preserve somewhere in the region of Stearns and Douglas counties, where the animals are bred for the bounty, or else the whole Northwest, as far north as Hudson’s Bay, has been harried and scoured by the bounty hunters.
— The Winona Daily Republican (Winona, MN), 19 Dec. 1868

Ohio has a law which allows a bounty on all hawks killed. The natural result of which is that farmers are now grumbling because as the festive hawk disappears under the bounty hunters the field mice increase.
— The Journal Times (Racine, WI), 15 Nov. 1882

Don’t talk to me, after this, of the cute ways of San Diego coyote scalp bounty hunters, when we have such a scalp hunter in another county.
— Los Angeles Times, 8 Oct. 1893

There were 2,085 English sparrows killed by seventy-two bounty hunters in Elgin, Ill., during the season just closed.
— Maine Farmer (Augusta, ME), 15 Mar. 1894

Though these hunters were certainly skilled at shooting rifles and enduring the elements, they would seem to come closer to what we would call mountain men than the grizzled vigilantes of Hollywood. So where were the bounty hunters of yore?

In Hollywood. When used with the meaning “one who tracks down and captures outlaws for whom a reward is offered,” the term bounty hunter dates only to the early 1950s—about a century after some pistol-packing tough guys were taking the law into their own hands in the Wild West. Author Norman A. Fox wrote serialized stories in syndication for newspapers that included characters with names like Packrat Purdy and The Phantom Bandit:

"You seemed much concerned about Purdy. Another bounty-hunter, I thought. So I discouraged you." "Because you wanted the reward for yourself?"
— The Daily Clintonian (Clinton, IN), 11 Jun. 1953

Elmore Leonard published his novel The Bounty Hunters in 1954, the same year that a western film called The Bounty Hunter was released, the first of many that used the term in the title or to identify characters. Some of these films of the ‘50s and ‘60s featured fading stars of 1930s serials like Randolph Scott and Buster Crabbe (who had played Flash Gordon).

When George Lucas created the mysterious and undeniably cool-looking character of Boba Fett to chase Han Solo in The Empire Strikes Back, he again looked to Hollywood’s version of history as a reference. Indeed, Lucas is said to have based the character on Clint Eastwood’s Man With No Name. Boba Fett was actually introduced in an animated segment of the now-infamous Star Wars holiday special made for television before the release of Empire. Adding to his mystique, the action figure of Boba Fett was initially available only as a mail-order item not available in stores, and early versions of the toy have become extremely valuable.

The spirit and mystery of Boba Fett lives on in The Mandalorian, featuring a new character also tied to the fictional planet Mandalore, wearing similar armor, and working as a bounty hunter. The world of Star Wars gave new life to the Hollywood legend of the bounty hunter, a designation probably chosen because it simply sounds cooler than reward hunter or bail bondsman. More recently, films and TV series featuring real and fictional contemporary bounty hunters have kept the term very much alive in the culture.

Why the term bounty hunter wasn’t used in the real old West, however, is lost in the Sarlacc Pit of history.