Both born and borne are forms of bear. Born is commonly used with the sense of bear meaning "to give birth." Borne is used in reference to carrying something (physically or figuratively), as a combining form with words like air, and, occasionally, in the "give birth to" sense. 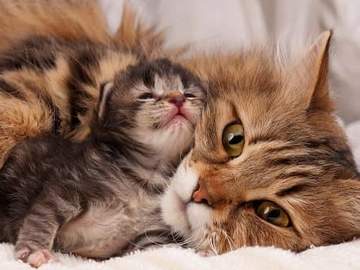 It's almost too cute to bear.

When sorting out the difference between born and borne, one confusing wrinkle is that both words originate from the same source: both are past tense forms of the verb bear. So how are they used differently?

Born is the common past-tense form of the verb meaning "to give birth." It is often used in the passive voice:

A lot of good ideas are born outside the workplace.

a movement born during the Renaissance

a law born out of necessity

The participle can also be an adjective meaning "originating from birth":

My cousin is a born entertainer.

It is said by many that borne is used for all other senses of bear apart from that referring to giving birth. This is for the most part true. Crucially, borne is used for those instances that refer to carrying something, especially figuratively (like an idea or burden):

There are several reasons for the current uprising that must be borne in mind in order to figure out where to go from here.
— Ahmed Zewali, The New York Times, 2 Feb. 2011

The report also examined the salmon farming industry in Canada, Norway and Chile, the other biggest global producers. It found that of the costs associated with fish farming, about 60% were borne by the producers, especially in the form of fish mortality and the cost of treating sea lice, but about 40% of the costs were borne by wider society, for instance in pollution, loss of fish populations and the impacts on the climate crisis.
— Fiona Harvey, The Guardian, 11 Feb. 2021

Udall said one big reason for the drop was that many parents of the youngest children, seeing what was happening with the virus, simply decided to keep them home an extra year. That is borne out by figures from the Department of Education: Of the more than 55,700 decline in children in public schools last year, close to 30 percent was in preschool and kindergarten programs.
— Howard Fischer, East Valley Tribune, 13 Apr. 2021

Borne is also frequently seen as a combining form to describe something that is carried or transmitted (as by a vehicle or insect):

keep your seatbelt fastened when we are airborne

However, it is also true that the spelling borne sees occasional use in the passive voice in the "to give birth to" sense:

Is that weird for you, for a project borne of such personal trauma to emerge into a world that’s so hungry for these kinds of stories?
— Julia Felsenthal, Vogue, 17 May 2017

As well as the active past participle:

Remarkably, Jackson supposedly made the comment that Peggy was “as chaste as a virgin!”, quite an accomplishment for a woman who had borne three children and had been married twice.
— The Knoxville Focus, 11 Aug. 2013