'Bonanza' and Other Words from Mining and Prospecting

There's words in them hills

English has a fair number of words which have sprung from the language of mining and prospecting, taken on figurative meanings, and now comfortably reside in our language in positions far from their origins. 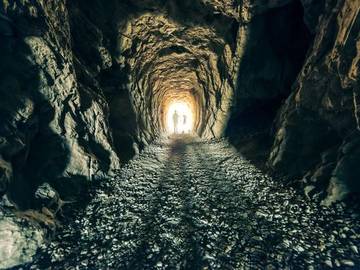 It's more than just fool's gold.

Mother lode, for instance, came into our language in the 1860s with the meaning “the principal vein or lode of a region,” but now is more often used in the sense “a principal source or supply.”

The vein is what is supposed to be the great “mother lode,” and appears to be in the extended system of quartz veins on the western slope of the Sierra Nevada, what the Sacramento river is to its numerous tributaries.
— Daily Evening Bulletin (San Francisco, CA), 26 Jun. 1865

I found it
beside me when I woke,
embedded in a kind of pain,
a mother-lode of awkwardness
wanting to get out.
— Robert Kelly, To find a place (in from the Loom), 1975

Similarly, strike it rich and stake a claim entered our lexicon in the middle of the 19th century directly from the jargon of miners. In common use today the terms are likely encountered in circumstances which have little, if anything, to do with mining or ore.

Several companies have “struck it rich,” on another flat about midway between there and Washington, which is formed by a slide from the hills having turned the river from its natural channel.
— The Sacramento Steamer Union (Sacramento, CA), 31 May 1853

Madam Rumor is always busy at the same time, and eager miners will rush to every point of the compass to stake a claim in the latest gulch that has been struck.
— The Montana Post (Virginia City, MT), 13 Oct. 1866

The balance of power at young tech companies has long been a delicate issue. Silicon Valley’s start-up ecosystem relies on founders’ and investors’ getting along — the entrepreneurs come up with the ideas and need the financiers’ money while the financiers need the founders to help them strike it rich.
— Katie Benner, The New York Times, 21 Jun. 2017

By the time Shania Twain began work on her third album, she had already staked her claim in country music with 1995's The Woman in Me, which had hits like "Any Man of Mine" and "You Win My Love.”
— Taylor Weatherby, Billboard, 18 Nov. 2017

One of the oldest members of this curious group is bonanza, which entered into our language several decades before the words listed above. The word, which comes from a Spanish word of the same spelling (and which in that language has the literal meaning of “calm sea”) has been in use since the 1820s, initially meaning “ an exceptionally large and rich mineral deposit (as of an ore, precious metal, or petroleum).”

The shaft of San Antonio will produce a bonanza that will eclipse every thing hitherto known in either America.
— United Mexican Mining Association. Report of the Court of Directors, Addressed to the Share-holders, 1825

Secho, although it fell off for a few weeks, is now returning to its prosperous state; and the last letters announce that Guadaloupe is in bonanza.
— The Times (London, Eng.), 12 Sept. 1826

Since I have been here, I learn that the Temascaltepec Mine promises yet well, though no actual bonanza has as yet been discovered.
— Alexandria Gazette (Alexandria, VA), 12 Nov. 1827

In the later 19th century bonanza made the logical progression to being used to describe any one of a number of valuable, profitable, or rewarding things; in the 20th century it has broadened its meaning still further to include “a very large amount.”

Towering palms sheltered trees of quince, mandarin, banana, fig and much else, which in turn shaded a bonanza of flowers.
— Teresa Levonian Cole, The Guardian (London, Eng.), 7 Feb. 2004

Words such as bonanza demonstrate the effortless mutability of language. In the citation below we see the word having traveled from its Spanish port of “calm sea,” less than 200 years later appearing in the English translation of a Mozambican writer (writing in Portuguese), referring to the sartorial contents of a suitcase.