How To Use Bombastic

Meaning and History of Bombastic

We've each met one: a person whose way of talking is full of pretentious, highfalutin language, a bombastic speaker.

Bombastic, which means "marked by or given to pretentious inflated speech or writing," sure looks like a derivative of the word bomb, but there's no etymological link between the two. Bomb is probably ultimately from a Latin word that means "a deep booming noise," but bombastic is the adjectival offspring of the English word bombast. 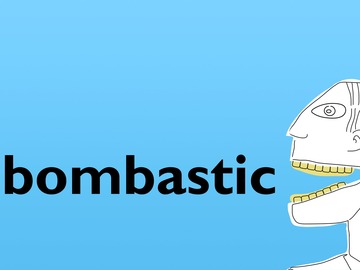 Bombast first came into English in the late 1500s, where it referred to cotton, and especially cotton that was used to pad out things. In fact, one of our early citations describes that exact action: "To stuff thy doublet full of such bumbaste." The idea of padding led to bombast being playfully applied to thick speech without much heft to it. Bombast gained that sense by the 1600s, and the adjective bombastic arrived in English in 1660.

A song of a similar name, Boombastic, briefly topped the charts back in 1995 – but being called bombastic is not a compliment. Synonyms for bombastic include gassy and windy, so one could fairly say that being bombastic, well, stinks.