The History of 'Boggle' Will Boggle Your Mind

It shares an origin with 'bogeyman'

Usually it’s the mind that boggles or gets boggled. In either case, the person with the mind that is boggling or being boggled is amazed or overwhelmed by something:

The patent [for the contact lens camera] also mentions usage cases where the lenses are fitted to animals. The mind boggles at what might be achieved in the future by paparazzi squirrels.
— Paul Monckton, Forbes, 30 Apr. 2016

Hot pot requires more than just broth. You need ingredients to dunk, and the number of options truly boggles the mind: 30-plus meat and seafood choices, just as many kinds of vegetables, and multiple varieties of noodles, dumplings and tofu.
— Nick Kindelsperger, The Chicago Tribune, 22 Apr. 2016 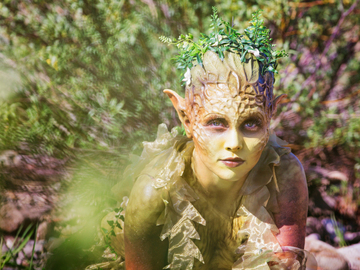 'Boggle' probably comes from 'bogle', a word for a goblin or specter. Horses were said to 'boggle' when they made a sudden jerky movement—as if startled by something human eyes couldn't see.

But before people were overwhelmed by hot pot options and paparazzi squirrels, they were overwhelmed by supernatural forces—at least, they believed they were. Etymologists think that boggle likely comes from an obscure British dialect noun, bogle. A bogle is a goblin or specter, or, more broadly any object of fear or loathing. (Bogle is also the likely origin of the bogey in bogeyman and its variant boogeyman.)

Time was, it was more often imaginations that boggled:

To tax a prefect with having stolen a sovereign was a task at which Pillingshot's imagination boggled.
— P.G. Wodehouse, "Pillingshot, Detective," 1910

But in the earliest known example of boggle in use, it wasn’t a mind or an imagination that boggled but some horses. The sentence is from a late 16th century translation of Homer’s Iliad:

They [steeds] should not with affright Boggle, nor snore.

Back then, boggle meant “to make a sudden jerky movement (as of alarm)” or “to start with fright.” According to the Oxford English Dictionary, the connection between creepy bogles and horses boggling resides in the reputation horses have for being able to see goblins and specters, and to (understandably) start with fright when they do.

No one seems to have minded the idea that a horse or an imagination or a mind might boggle, but for a time, there was controversy over whether boggle should be used as a transitive verb—that is, whether it was okay to say that something boggled the mind, the imagination, or a person (or horse). Transitive use dates to at least the 1830s, but it wasn't at all common until the 1950s. Commentators were troubled by it in the latter part of the 20th century, but it seems everyone has pretty much accepted it now. In fact, it slightly boggles the mind that "boggles the mind" was ever controversial.

The term mind-boggling, by the way, dates to the same time period as the increased use of the transitive boggle.