Time to body slam your wrestling buddies with some knowledge.

Although Body slam is a fairly recent addition to our vocabulary, it has already lost at least one of its meanings. The longer a word sticks around the English language, the greater the chances are that it will take on additional meanings. Oftentimes these words will exfoliate as well, shedding senses and meanings as they take on new ones. Historical dictionaries try to record these obsolete definitions of words, but some of the meanings are so fleeting they slip away before they are committed to the confines of a reference work. Such is the case with body slam. 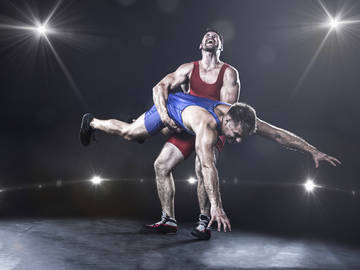 Whatever sport it's being used to describe, a body slam is something you might want to avoid.

Our dictionary and all the others which enter body slam define it as a wrestling move, one which involves at least one body, and a certain degree of slamming. However, this was not the initial meaning of body slam when it first began to be used in print at the end of the 19th century; it was a boxing term.

The earliest use of the word we know of currently comes from an article in The Washington Post in 1899, covering a fight between Pat Raedy and Billy Peyton.

Pat was felled four times, the first from a right swing for head, and the other three spills from body slams with the right, the gong again saving him.
The Washington Post, 30 Nov. 1899

Raedy and Peyton were boxers, not wrestlers, and were busily occupying themselves with punching each other in the face and about the body (as boxers are prone to do). Even in the somewhat less-regulated realm of 19th-century prizefighting, picking an opponent up and slamming them to the mat was uncommon. In fact, over the next few decades body slam is overwhelmingly used to refer to a hard punch to the body.

As they separated Tommy banged a telling smash to the jaw that had Ryan on the ropes. Billy slippeed (sic), and they exchanged close body slams.
—The Scranton Republican (Scranton, PA), 15 Aug. 1911

O’Keefe scored with a jumping left jab and wicked body slams at close quarters in the sixth and seventh rounds in a way that made matters look dubious for the local boy.
—The Allentown Democrat (Allentown, PA), 13 Dec. 1913

The fourth was the telling session, half a dozen stiff body slams together with drives to the head, put Lever in condition for the finale which came early in the fifth, when Dugan layed his mit against Lever’s cheek, forcing Lver to lay his cheek against the mat.
—The Lima News (Lima, OH), 15 Mar. 1919

It is not until the early 1930s, when body slam has undergone a process known as functional shift, and is being used as a verb, that we see evidence of it being used as a wrestling term. Even when it does become used to describe wrestling, it is unclear whether it referred to actually lifting a wrestler off the mat and slamming them down, or instead simply was used as a synonym for pinning, or winning the match.

Vassell body-slammed Axel Anderson of Quincy in 9 minutes 21 seconds.
—The Boston Globe, 8 May 1931

The use of body slam in boxing appears to have faded completely from use, perhaps due to body blow being an already existing term for punching a person in the body. In addition to the wrestling sense, it may be found used figuratively.

The rumors were wrong. Mould smashed all doubts with a body slam of a concert Friday night at the Central Park President's Room.
—Thor Christensen, The Milwaukee Journal, 13 Oct. 1990

By now everybody knows that Kelley has written a body-slam of a book about Nancy Reagan, a work that has dominated all best-seller lists since its release a month ago.
—Nicholas Basbanes, Telegram & Gazette (Worcester, MA), 15 May, 1991

Bush has been criticizing Sen. Marco Rubio for missing votes in Congress. At the debate, he repeated that criticism and Rubio delivered a body slam of a response.
—The Denver Post, 30 Oct. 2015