Is the Word 'Biceps' Plural or Singular?

Words that are “borrowed” into English from other languages become naturalized English words and follow English rules of grammar—usually. A problem can occur when the borrowing is a noun that ends with -s but was singular in its language of origin: such a word will always look like a plural to an English speaker. 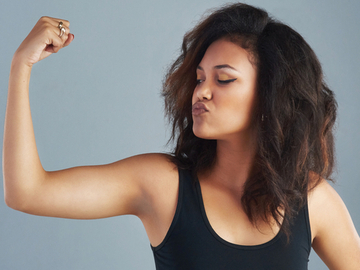 The literal meaning of 'biceps' is “two-headed,” referring to a muscle that has two attachments to the bone.

One example is kudos, a word taken directly from Greek that ends in -s and is singular. Since it is most frequently used as a noncount noun (it takes a singular verb, like applause), it’s easy to ignore the question of whether the word is perceived to be singular or plural. But many English speakers have “fixed” what was never broken by creating the “singular” form kudo (as in “we rarely hear that kind of kudo anymore”), made by removing the -s because kudos was taken—erroneously—to be a plural.

Latin also has singular nouns ending in -s, including the anatomical words biceps, triceps, and quadriceps. These words are all singular in Latin and were borrowed in the 1600s or later, during a period when linguists favored the pure Latin forms for anatomical and scientific vocabulary (another example from this period is forceps). Had these words been borrowed three or four centuries earlier, it’s likely that they would have become more anglicized over time, but the scholarly language of the Renaissance was Latin, which means that words borrowed during this later period often kept their pure Latin forms.

The ceps in biceps, triceps, and quadriceps comes from the Latin word for “head”; the literal meaning of biceps is “two-headed,” referring to a muscle that has two attachments to the bone (this definition of head is “the end of a muscle nearest its origin”).

But, just as back-formation created kudo from kudos, some people now use bicep when referring to the muscles of one arm, as if biceps were a plural word:

A 17-year-old boy from Skokie was shot in the right thigh, while a 19-year-old man from Evanston suffered a gunshot wound to the left bicep.
—Ashlee Rezin, Chicago Sun Times, 20 June 2016

In fact, bicep is used frequently enough that it is entered in the dictionary, where it is defined as a synonym of biceps. Its first recorded use is 1939.

Interestingly, quads is frequently used for quadriceps, and retains the plural construction. English speakers have somehow decided that the two-headed biceps is a single muscle but the four-headed quadriceps is four muscles—a distinction that is more logical linguistically than anatomically.

Careful language use will always bring you kudos, so you might want to use that biceps to pick up a dictionary from time to time.