If you're at all interested in grammar, then you've probably heard the maxim about among and between: only use between when you're referring to two things ("just between us," "between a rock and a hard place," "you must choose between cake or death"), and use among when referring to more than two ("you're among friends," "among the many options available to you"). But like many maxims about grammar and usage, this isn't necessarily the case. 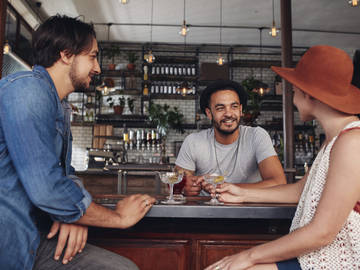 Substituting 'among' for a more idiomatic 'between' can create more awkwardness than it solves.

History of 'Among' and 'Between'

Both among and between date back to Old English. Among was originally a phrase (on gemonge) that meant "in a crowd," and the noun gemonge came from a verb that means "to mingle or mix." From the very beginning, among has been used to refer to a position (literal or figurative) in relation to a surrounding group of individuals, like friends, or something taken to be a composite, like a basket of flowers.

Between, meanwhile, began its life a little after among. It's direct from Old English, and is related to the word twā, which means "two." This is likely the reason some people insisted that it can only be used of two people or things—it's from the word "two"! But between originally was like among: it referred to a number of people or things. In fact, our earliest use of between in English is in reference to the Apostles, and our sources confirm that there were definitely more than two of them.

That's not to say that between and among have exactly the same use or connotation, though. We use between when we want to express a relation to things and have them considered as individual and usually equal entities: between the devil and the deep blue sea; the restaurant between my house and my work; a treaty between nations. This connotation stems from an earlier use of between that referred to a point between two places, or travel between two specific points. Among, on the other hand is the best word to use when referring to things collectively and imprecisely: for this reason, among many others; no honor among thieves.

Like many rules around use, you'd be wiser to follow your own native sense of the language than hewing strictly to them. Substituting among for a more idiomatic between can create more awkwardness than it solves:

Mr. Mifflin has protested since 1914 that Ambrose Bierce would show up some day and flatly refute every single thing I have written about the amazing quadrangle that existed among Hodgson, Conrad, Nugent, and Eve.
—James Thurber, letter, 2 May 1946

Yes, Thurber used the "correct" among here, since there are more than two people being discussed. But it sounds awkward, especially given that among connotes vagueness, and following it up with the names of four distinct people, considered by Thurber to be on equal footing—in a quadrangle, even—negates among's essential vagueness.

Or consider this use of among, which was definitely chosen over between entirely due to the numbers:

The psychiatrist said under cross-examination...that he would include simultaneous intercourse among two men and a woman—a scene shown in the film—in the category of normal...
—New York Times, 30 Dec. 1972

Some things in life shouldn't be so vague.

This sort of overcorrection is common when a writer wants to sound fancy or educated, but there is another overcorrection that gets grief from usage commentators: the substitution of the variant amongst for among or between. For instance, Bryan Garner, in Garner's Modern English Usage, gives a perfect example of the criticism against amongst, calling it an archaism that "is pretentious at best," but our evidence doesn't confirm that view. Amongst is certainly less common than among, and it's used more in British English than it is in American English ("Amongst our weaponry are such diverse elements as fear, surprise, ruthless efficiency..."). Those two facts may be reason enough for amongst to stand out to an American speaker. But we have many not-so-quaint and unpretentious American uses of it in our files:

Pelican is a wild town where one year before there had been a shootout of sorts amongst some fishermen,...
—Donn Groom, Cruising World, March 1984

As many as 29 potential sites were found, each of which offered a dead spot amongst the maze of microwave beams.
—John W. Verity, Datamation, July 1982

Amongst the evidence were verbal slams from such network luminaries ...
—John Weisman, TV Guide, 11 Sept. 1981

According to a recently released survey by ACNielsen, satellite-TV penetration into Saudi homes is now 80 percent: "Amongst the highest in the world."
—Christopher Dickey et al., Newsweek, 22 July 2002

It is, however, a little pretentious when swapped for among in fixed phrases and idioms like among friends and first among equals.

What should a discerning reader and writer do, then? Use your instincts. If swapping among for between sounds off somehow, then it probably is. Even the best usage writers have set forth the among/between diktat and then immediately strayed:

among, between: Among may apply to any number; between applies to two only.
—Frank Vizetelly, A Desk-Book of Errors in English, 1906, p. 14