Most words go through life without much excitement, doing their jobs and never attracting much attention. Others, such as dilapidated, stir up a small amount of fuss (at one point, some thought that referring to a wood house as dilapidated was incorrect, since the word is rooted in the Latin word for stone, lapis). Some words, such as like, are just provocateurs. Between is one of those unruly few. 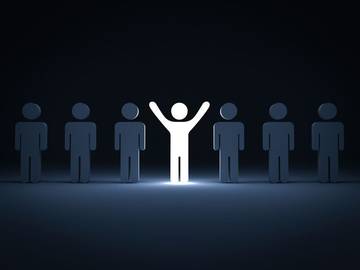 "Discriminate carefully between these words."

The first edition of Fowler’s A Dictionary of Modern English Usage (1926) listed five areas of concern for this word, and the second edition (1965) added a sixth. Among these were the word’s use as a hypercorrection, in the dread phrase “between you and I,” and when used in certain circumstances preceding the word each. For today, however, the only form of between’s attention-seeking behavior we will look at is when it is used in place of among.

As is the case with many usage issues in English, it is now highly likely that some readers have developed an eye twitch at the thought of this application, while others are responding with “I don’t really see what the problem is….” If you are a member of this latter group the issue is this:

Among may apply to any number; between applies to two only.
— Frank Vizetelly, A Desk-book of Errors in English, 1920

It is perhaps imprecise to refer to Vizetelly’s admonition above as a rule, but since “strong recommendation based on ignorance of lexical history and disregard for nuance” is too long to write every time, let’s call it a rule. So why do we have it?

Although he may not have been the first to say so, Samuel Johnson in 1755 added a usage note, curiously formatted as the definition of the sixth sense of between, which read “Between is properly used of two, and among of more; but perhaps this accuracy is not always preserved.” A footnote by the grammarian Goold Brown in his 1851 The Grammar of English Grammars snidely notes that one of his contemporaries had made a mistake in his use of the word, since it “cannot have reference to more than two things or parties.”

However, betwixt these two books (in 1828) we find that Noah Webster defined between as “Belonging to two or more…. We observe that between is not restricted to two.” What to do? Well, we cannot tell you what you should do, but we can tell you something of the history of how the word has been used.

In all senses, between has been, from its earliest appearance, extended to more than two…. It is still the only word available to express the relation of a thing to many surrounding things severally and individually, among expressing a relation to them collectively and vaguely.
— Oxford English Dictionary (oed.com), “between” (sense 19)

Our own citation files have many examples of between being applied to settings of more than two, often by writers of some renown, and often used in a way where among would sound strained.

Undoubtedly there is something in common between the three (Dante. Chaucer, Villon)
— T. S. Eliot, “Dante” in Selected Essays, 1932

Constantine a little before his death, upon the importunity of the souldiers made Dalmatius his brothers sonne Caesar also; but by the same souldiers he was oppressed, and so the Empire was divided betweene the three brothers.
— Alexander Ross, The History of the World, 1652

None of this should be taken as a suggestion that between and among are interchangeable. The two words have some degree of overlap, but also significant differences. Additionally, none of the above should be taken to mean that you may not have preferences in this matter, and you should feel entirely comfortable following your own self-imposed guidelines for when to use between and when to use among.

It should, however, be taken as a refutation of the over-generalizing rule that Frank Vizetelly espoused earlier in this article. It is not difficult to find cases in which among sounds wrong no matter what the number (when was the last time you heard anyone describe being “among the devil and the deep blue sea”?). And as for the question of whether between may be used for numbers greater than two, we have only to look elsewhere in Vizetelly’s own book to see that sometimes this works quite well.

bring, carry, fetch: Discriminate carefully between these words.
— Frank Vizetelly, A Desk-book of Errors in English, 1920

Discriminate carefully between these words, indeed.