Bellwether (note the -wether spelling) is a term that pops up frequently in writing about politics:

California was the Big Kahuna of June 5 primary states. And New Jersey has four competitive House races going on this year. But it’s another June 5 primary state, Iowa, that may wind up being the more important bellwether heading into autumn.
— Ed Kilgore, New York Magazine, 6 June 2018

Together, Kamenetz told Ervin, they represented Maryland: a progressive black woman from the state’s most populous jurisdiction and a moderate white man from bellwether Baltimore County.
— Ovetta Wiggins, The Washington Post, 10 June 2018 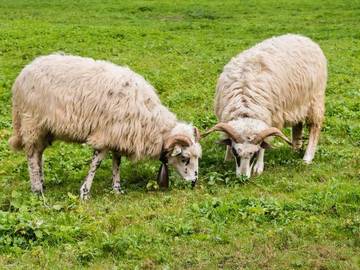 Yes, an actual bell is involved.

Bellwether is defined as “one that takes the lead or initiative” or “an indicator of trends.” It’s in this second sense that you’ll see the word pop up frequently in years that lead up to midterm elections. That’s because pundits and analysts try to read the polls and results from those elections to see if they might predict something about the sentiment of the country regarding the presiding administration and how it might pan out for the presidential election two years later.

Because it suggests the act of forecasting, one might be inclined to think that bellwether has something to do with weather—think of a trial balloon, which is something meant to test the public’s sentiment on an issue and which alludes to an object that is affected by atmospheric conditions.

But the wether in bellwether has nothing to do with meteorology. Instead, it has to do with sheep. Wether is the term for a castrated ram, and a bellwether is the sheep selected among the flock to be fitted with a bell. The sound of the bell in the distance would indicate to a shepherd where the flock had roamed.

The modern Greeks pronounce it as a V consonant, and confound three vowels, and several diphthongs. Such was the vulgar pronunciation which the stern Gardiner maintained by penal statutes in the university of Cambridge: but the monosyllable represented to an Attic ear the bleating of sheep, and a bellwether is better evidence than a bishop or a chancellor.
— Edward Gibbon, The History of The Decline and Fall of the Roman Empire, Vol. 6, 1788

The sheep designated as the bellwether wasn’t necessarily the most domineering; if anything, the ideal bellwether probably didn’t stray too far on its own as the rest of the sheep grazed. Nevertheless, bellwether soon became the term for one who leads the pack or sets the tone followed by others:

Home to 1 out of every 6 Africans and all the ills that plague post-independence Africa --civil war, ethnic and religious strife, corruption and economic mismanagement -- Nigeria is a bellwether for Africa's nascent democracies.
— Eric Ransdell, U. S. News & World Report, 10 Aug. 1992

"There were some hot clothes," says Kalman Ruttenstein, senior vice president for fashion direction at Bloomingdale's, who calls Armani a bellwether -- and the one compelling reason to keep returning to Milan. It is, in fact, Armani who sets the tone for other top designers, many of whom lose no time incorporating his key looks into their collections.
— Ruth La Ferla, The New York Times Magazine, 21 Oct. 1990

Its use in the sense of something that indicates how others are likely to act or behave can occur in contexts outside of politics:

Airline music is also as much a bellwether of mass tastes as any record sales chart or MTV countdown. Harboring any doubts that Bonnie Raitt and the B-52's have overcome has-been status to emerge as icons? Just look at how they pop up on this summer's in-flight schedules.