It's not begging at all

Begging the question means "to elicit a specific question as a reaction or response," and can often be replaced with "a question that begs to be answered." However, a lesser used and more formal definition is "to ignore a question under the assumption it has already been answered." The phrase itself comes from a translation of an Aristotelian phrase rendered as "beg the question" but meaning "assume the conclusion."

Beg the question: it's an odd phrase if you think about it, but most of us don't:

The U.S. Postal service says that personal letter delivery is at an all-time low…. Which begs the question: are open letters the only kind the future will know?
— Charlotte Alter, Time, 2 Dec. 2015

Capabilities, says Mr [Amartya] Sen, are ends that economists should strive to maximize…. That begs the question of which capabilities a society should maximise.
— The Economist, 20 Dec. 2014

It's not the first time a fan has been injured by a batted ball or broken bat flying into the stands, nor is it likely to be the last. But that begs the question: Why are teams putting fans at risk in the first place?
— Matt Lindner, The Chicago Tribune, 25 Aug. 2015

What Does Beg the Question Actually Mean

In each of these, beg the question means "to cause someone to ask a specified question as a reaction or response." What's the beg about? Why isn't it "elicit the question" or "raise the question"? 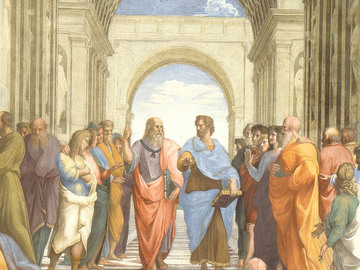 'Beg the question' is a phrase from formal logic—it's a 16th century translator's rendering of Aristotle's 'petitio principii'. A better translation would have been "assume the conclusion."

It makes more sense in a newer version of the phrase. Since the 1960s we've seen a steady increase in phrases like a question that begs to be answered and one question begs an answer:

The influx of big data has boosted granular targeting capabilities, and with the rate at which data is being generated, a natural question that begs to be asked is, “what’s next?”
— Val Katayev, Forbes, 23 Nov. 2015

Still, the question begs to be asked: How could a team with one road win possibly be overconfident?
— Janie McCauley, The Associated Press, 14 Dec. 2015

The other key question that begs to be answered is: what is valuable in Yahoo to buy?
— Leslie Settles, The Wall Street Observer, 5 Dec. 2015

These uses still trail beg the question by a lot, but they're increasing—most likely because the logic in them is more easily seen.

There's a segment of the population that would be enormously relieved if phrases like a question that begs an answer replaced the usual begs the question uses. These are people who think using beg the question to mean "to cause someone to ask a specified question as a reaction or response" is completely and thoroughly wrong. There are probably more of these people than you think, and they are judging the rest of us.

Other Uses of Beg the Question

For these people, the only "correct" way to use the phrase beg the question is with the meaning "to ignore a question or issue by assuming it has been answered or settled." They think these examples are acceptable:

Rich parents send their daughters to all-female schools; why shouldn't the daughters of the poor enjoy similar advantages? That's an appeal bound to elicit sympathy, especially from guilty liberals, but it begs the question of whether the daughters of the rich benefit from single-sex education. Perhaps they benefit merely from being rich and attending elite private schools with favorable student-teacher ratios and superior facilities and curricula.
— Wendy Kaminer, The Atlantic, April 1998

But the notion of a homunculus—a "little man"—inside the brain who watches the world on something like a little television set is hardly an explanation, because it begs the question of how the little man himself is able to perceive things. Concealed in him must be an even smaller man who watches an itsy-bitsier TV, and so on ad infinitum, like nested Chinese boxes.
— Paul Hoffman, Discover, September 1987

The problem is that beg the question is only very rarely used this way, as language blogger Stan Carey explains here. In our dictionary the sense bears the label "formal."

The formal meaning does, though, help us get to the origin of the phrase itself.

Origin of Beg the Question

Beg the question is a phrase from formal logic. We have Aristotle to thank for it—or, actually, an anonymous 16th century translator who took Aristotle's phrase petitio principii and rendered it in English as "beg the question." A better translation would have been "assume the conclusion," as linguist Mark Liberman at Language Log explains; petitio principii is used to name the logical fallacy in which an argument assumes the very thing it's trying to prove. Here's an example:

If left to themselves, children will naturally do the right thing because people are intrinsically good.

This statement tries to prove that children will naturally do the right thing by using the unproven assertion that people are intrinsically good. That assertion is problematic because it is little more than a broader version of the thing that is being proven.

So that's where beg the question comes from, but all this, ahem, begs the question of what you should do with all this knowledge about the phrase. Liberman recommends that people avoid it altogether (but also "cultivate an attitude of serene detachment in the face of its use by others").

You may take his recommendation, or you may use beg the question to mean either "to cause someone to ask a specified question as a reaction or response" or "to ignore a question or issue by assuming it has been answered or settled." Both uses are established, and the first one is ubiquitous.

One more little matter here: the "to ignore a question or issue" meaning of beg the question has led to a meaning of beg defined as "evade" or "sidestep." It's typically found in phrases like "beg the issue" or "beg the point":

Some of you may be quick to notice that steroids and other PEDs [performance enhancing drugs] are banned. It's cheating to use them. But not so surgery, which is entirely on the up and up. But this just begs the issue. Why have we banned use of performance enhancing medicine but not surgery?
— Alva Noë, NPR.org, 26 July 2013

The haters don't like that either, but it too is fully established.