Remembering How It Was in the 'Before Times'

A word for the long-ago and what seems like long ago.

The term Before Times has become a go-to expression of nostalgia for how things used to be pre-COVID-19. This term made its appearance long before the coronavirus pandemic and has long carried an association with stories of apocalypse scenarios, notably in a Star Trek episode in which the Before Time was a period before a plague killed a planet's adults. An older sense of beforetime, meaning “formerly,” dates back to the 13th century. Now the term is often invoked when reminiscing of the time before the lockdowns of 2020. 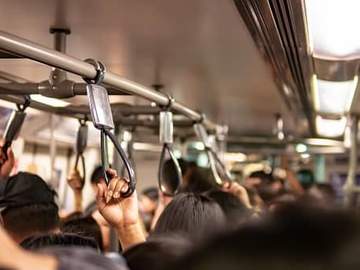 Getting stuck between stations, for old times' sake

Current Usage of 'Before Times'

Remember the Before Time? Or, as we tend to say now, the Before Times (or even beforetimes)? In the COVID-19 era, the phrase has become a go-to term that expresses nostalgia for how things used to be—before masks and social distancing, when we could occupy restaurants and concert halls without risking the spread of disease.

I will admit: In the Before Times, I owned just one (1) sweatsuit, but now that we're quarantining and working from home, I own, maybe, a dozen (12) pairs of matching sweats. It really is all that I wear now.
— Kim Duong, Cosmopolitan, 21 Feb. 2021

Like fondue restaurants, kissing booths, and so many other relics of the before times, it became hard to picture what the Curry Experience would be like when it returned.
— Nick Greene, Slate, 16 Feb. 2021

More importantly, they know how to have intimate conversations with total strangers under bizarre circumstances — like, say, a crowded bar at the Chicago Magic Lounge. (I speak here of the before times.) These days, most of us Muggles struggle to even be a tenth of ourselves on Zoom or Teams. But a decent magician always knows how to make an audience comfortable.
— Chris Jones, The Chicago Tribune, 7 Feb. 2021

'Before Time' in Star Trek

In "Miri," the eleventh episode of the original Star Trek TV series (broadcast in October 1966), the crew responds to a signal coming from an Earth-like planet. Beaming down, they discover the planet inhabited with children who have survived a plague that killed the adults on the planet.

One of the characters, a girl named Miri, explains how the adults disappeared: "That was when they started to get sick in the Before Time. We hid, then they were gone.”

As evidenced by its use on Star Trek, "before times" has long carried an association with science fiction and stories of apocalypse—situations where the world changes drastically, but with the time before that change being recent enough to remain a distinct memory. The world, as it existed then, might seem unrecognizable in contrast to how things are now.

The Star Trek episode was parodied in an episode of the fourth season of South Park, which aired in December of 2000, with characters making reference to the "before times" on that show as well, so its pop-cultural relevance was renewed for anyone who hadn't already been familiar with the original.

The History of 'Before Time'

An older sense of beforetime is entered in the dictionary as an adverb meaning "formerly." This sense itself very much belongs to the Before Time: it dates to the 13th century. It finds use in a couple of places in the King James Bible ("Beforetime in Israel, when a man went to enquire of God, thus he spake, Come, and let us go to the seer: for he that is now called a Prophet was beforetime called a Seer."–1 Samuel 9:9).

The word's archaic ring was deemed useful by some later writers, who would insert the word into epic narratives as they sought to depict lands and civilizations that time forgot or that had undergone some significant change before the events of the story. One example is Jack London's story "The Sunlanders" (1902), set in Mandell, an "an obscure village on the rim of the polar sea":

"Ho! ho! ho!" So suddenly and so fiercely did Ounenk laugh that every voice hushed. "Never was there such a fight! So I say, I, Ounenk, fighter beforetime of beasts and men. And ere I forget, let me speak fat words and wise. By fighting will the Sunlanders teach us Mandell Folk how to fight. And if we fight long enough, we shall be great fighters, even as the Sunlanders, or else we shall be--dead. Ho! ho! ho! It was a fight!"
— Jack London, "The Sunlanders," 1902

Another writer, Rudyard Kipling, used beforetimes in "Simple Simon," a tale of fantastic fiction narrated by a shipbuilder who had been friends with Francis Drake:

'With one thing and another, and my being made a burgess of Rye, I never clapped eyes on him for the next twenty years. Oh, I had the news of his mighty doings the world over. They was the very same bold, cunning shifts and passes he'd worked with beforetimes off they Dutch sands, but, naturally, folk took more note of them.'
— Rudyard Kipling, "Simple Simon," 1910

The notion of a "Before Times" became a regular element of science-fiction writing—with plots that involved situations like alien invasion or surviving a nuclear catastrophe—even if the term itself wasn't explicitly used in the text. Once the COVID-19 pandemic began to affect how we live, it was natural to recognize in our altered day-to-day existence elements that seemed to once be the domain of science fiction—from the eerie quietness of vacant public spaces to the use of video screens to conduct conversations.

But even as Before Times becomes pinned to a particular period of our memory, the word has retained its pedigree, with some writers continuing to evoke an association with strange and imagined worlds:

"That's how you end up with, 'Now serving second breakfast,'" said Headley, referring to a restaurant sign catering to the eating habits of hobbits. But he credits Scanlon with one of his favorite bits: "At the very beginning, they show the beforetimes when [adventurers] go in, chase off the dragon and get this goblet. And then later at the pawn shop, that goblet's on the counter, holding pens or something."
— Michael Ordoña, Los Angeles Times, 25 Jan. 2021

Hopefully the aftertimes will be here before the beforetimes becomes too distant a memory.