Where Does the Phrase 'Barn Burner' Come From?

From politics to 'a very exciting event'

As March Madness heats up we are more than likely going to encounter a peculiar word that is much beloved by sports writers and political pundits alike: barn burner. 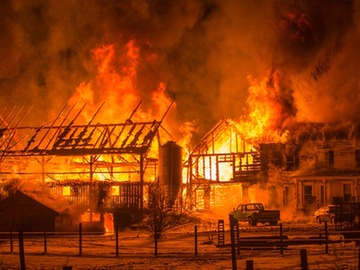 The 'Barnburners' were one of two competing factions in the New York State Democratic Party in the middle of the 19th century. The name was “in allusion to the story of an old Dutchman who relieved himself of rats by burning his barns which they infested.”

In the modern parlance a barn burner is defined as "a very exciting game, event, etc." The earliest citation in our files for this use is from 1934:

A real “barn-burner” was the following hand, which provided plenty of excitement at the evening session.
—Omaha World-Herald, 13 May, 1934

It should be noted that the barn burner here is a game of bridge, which perhaps gives fodder to those of us who think that the 1930s were a simpler time, and that our ancestors found certain things more exciting than we do today. Today barn burner is often used to describe a sporting event or some other contest, such as a political race, which occasions a good deal of excitement.

But before this 20th century use, barn burner had a very specific meaning in US politics. The Barnburners were one of two competing factions in the New York State Democratic Party in the middle of the 19th century. John Russell Bartlett, in his 1848 Dictionary of Americanisms, provided a lengthy quote from the New York Tribune, which explained that the name was “in allusion to the story of an old Dutchman who relieved himself of rats by burning his barns which they infested.” In this case, the Barnburners were so determined to get rid of systemic abuses that they were willing to destroy the system itself.

The Barnburners were the more radical of the two political groups; the more conservative party was referred to as the Hunkers (possibly on the grounds that they were interested in a hunk of the political spoils, or because they hankered after elective office).

The Governor’s favorites for Speaker, Printers, Bank Directors, all have been floored by the “Barn Burners,” as the Radicals are yclept in our State.
—New York Tribune, 20 January 1842

It has long been thought that the New York Barnburners were the originators of that term (aside from the occasional person who literally burned down a barn), but recent findings have indicated that the term began its life describing radicals in a neighboring state, Pennsylvania, slightly earlier.

We do not know to what particular class the new epithet of “Barn burners” is intended to be applied, but it strikes us as highly characteristic of those who trample upon the rights of citizens and the laws of the land.
—Public Ledger [Philadelphia, PA], 17 April 1840

It matters little where exactly the word began being used. What is germane is that we have a word which began its life as a term for a radical faction of politicians and then segued to being a descriptor of some exciting event. Go team.