The Mystery of the Backward Index

Why would anyone type out 315,000 words spelled in reverse?

Say you wanted to find out how many words end in "-ology" or "-ism." How would you figure it out? Ok, you'd use a computer. Now then, let's take computers out of the picture. Is there any way to find that information, short of flipping through the entire dictionary? 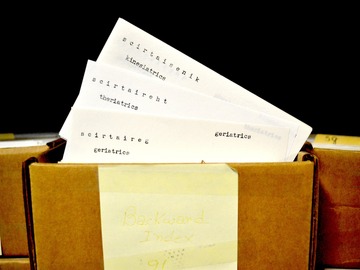 Philip Gove, editor of Merriam-Webster's Third Unabridged, had a faster way. The first step: Type all of the words in the dictionary backwards. Editor-at-Large Peter Sokolowski takes a look into the Backward Index.

Structure was paramount to Gove. He was a linguist who used the logic of a programmer long before the days of personal computing, and in the 1950s and '60s he seems to have been thinking about the dictionary with the extreme rigor of a software engineer. Though he could never have imagined search as we know it today, he would have been among the first to intuit its uses for lexicographers. So as work on the Third was winding down Gove set the typing staff to the task of creating a 3"x5" slip for virtually every word that appeared in boldface in the dictionary typed backward, each letter followed by a space (and spelled normally, without the extra spaces, below its backward spelling).

Hundreds of thousands of such slips were eventually produced. They occupied a card catalog on the editorial floor at Merriam-Webster until the mid-1990s, when they were transferred to cardboard file boxes and moved to shelves that fill a wall in the building's basement. The yellowed label on the end of each box is marked "Backward Index." There are about 315,000 slips in total, filling 129 file boxes. Words ending in e alone take up 23 boxes.

The Backward Index evidently turned out to be a useful tool in the pre-electronic age. For example, it could help identify a set of related terms that should be defined in similar ways, including open compounds (Highland pony, Shetland pony, Welsh pony), closed compounds (blocklike, clocklike, rocklike, socklike, chalklike), and morphologically related terms (phytopathological, ethological, lithological, ornithological). Thus, looking up all the diseases that end in –itis or all the doctrines and theories that end in –ism was now possible. Since rhymes depend on word endings, initial research for a rhyming dictionary also made use of the Index, where sequences such as seepy, steepy, weepy, sweepy and dorty, forty, shorty, snorty, porty, sporty, rorty, torty show up regularly.

The Backward Index was also useful for those "I-know-there's-a-word-for-that" moments; a colleague trying to remember the name of a particular phobia found it by looking up the listings at aibohp-. Answering unpredictable questions from the public turned out to be another use of the Index. Responding to the many letters (now mostly e-mails) that we receive every week sometimes presupposes a freakish omniscience of the dictionary. In the pre-digital era, how else could we have ascertained that there are some 500 words in the dictionary that end in –ology? that the third English word ending in –shion, after cushion and fashion, is fushion (a rare variant of foison)? that publicly is the only adverb that now more commonly ends in -cly than in -cally? or that there is a third word in English ending in -gry?

As a colleague in our electronic publishing department remarked after hearing a description of the Index, "These people wanted a computer."