Lookups for autophagy did not spike on the morning of October 3rd, 2016, which is a shame. The word, which we define as the "digestion of cellular constituents by enzymes of the same cell," has had some degree of currency in the scientific community since the middle of the 19th century. It was widely used after the Japanese cell biologist Yoshinori Ohsumi won the Nobel Prize in Medicine for his work in “mechanisms for autophagy,” which is thought to have application in fighting against dementia and cancer.

Japan's Yoshinori Ohsumi wins the 2016 prize for discoveries related to autophagy, the process in cells whereby they destroy themselves and send the parts out for recycling.
—Steve Mirsky, Scientific American, 3 Oct. 2016 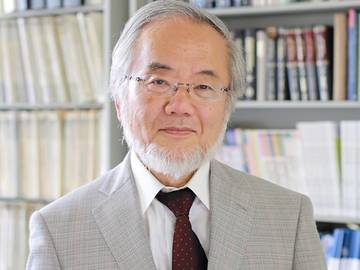 Distracted by having achieved one of his childhood dreams, Nobel winner Yoshinori Ohsumi would not admit to feeling disappointment at the fact that dictionary lookups for 'autophagy' had not yet started to trend. But he deserves better.

The word is formed from a combination of roots from two Greek words; aut- (from autos, meaning “same” or “self”) and -phagy (from phagein, meaning “to eat”). The earliest record we have of its use in English comes from early in 1860:

Autophagy.--The Art of Eating One’s self.—At a late meeting of the French Academy of Medicine, a very singular paper was read on autophagy, spontaneous and artificial.
—Medical and Surgical Reporter, 11 Feb. 1860

We are certain that a wide swath of the general public has no idea what autophagy means. And yet, at the time of this writing, the word was not yet in our 1000 most-looked for words, being edged out by such perennial favorites as dawdle (#961), clown (#674), and gloat (#657).

Ohsumi was said to have told reporters this morning that one of his childhood dreams was winning the Nobel prize, among the most prestigious awarded in the sciences, and was far too modest to admit any discontent over the fact that the word describing a key facet of his research had not yet spiked in dictionary lookups.

While it may not carry with it the financial windfall of 8 million Swedish kronor, having a word associated with one’s name rise in lookups in a dictionary carries a cachet that is, in a very real way, inestimable. So c’mon Internet, you can do this: bestow some additional honor on Yoshinori Ohsumi, and start looking up autophagy.