Many verbs have a particular preposition or two that they like to pal around with. You wink at someone, for example, and sing to them. 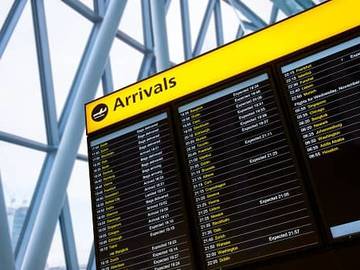 Prepare for the arrival of some grammar nerdiness.

It turns out that arrive to is very old. The Oxford English Dictionary includes an example of the collocation from 1539, when the word was a babe of merely a century and change. The OED also reports that arrive with to (as well as with into) is now obsolete. If that was indeed the case for a while, it no longer is: while arrive at (a destination) is far more common, arrive to has been seeing increased use for all of the current century and especially since the late 2010s.

People who care about these sorts of things (there are at least several of us) have historically criticized “arrive to." Our earliest knowledge of such disapproval was Robert Baker’s 1770 injunction against “arrive to” for literal senses of the word (he approved of “arrive at” for literal uses and either “arrive at” or “arrive to” for figurative ones). Later commentators made assertions along the same lines.

So then, to summarize where we have, ahem, arrived as of this point in our exploration: arrive to was common enough to be criticized from the late 18th century, rare enough to be identified as obsolete in the late 20th century, and common enough again in the second decade of the 21st century to be noted by lexicographers (such as yours truly) again. It all makes us very curious about these words.

To satisfy that curiosity, we’re going to dig down into some of the deeper realms of word nerdery, with the aid of a magnificent tome called A Comprehensive Grammar of the English Language, by linguists Randolph Quirk, Sidney Greenbaum, Geoffrey Leech, and Jan Svartvik.

According to Quirk et al., the verb arrive (or, to be more precise, the situation type it applies to) is transitional: this means that, as with such words as drop, take off, sit down, and die, it is conclusive and punctual. “Conclusive” means that there is a change of state; the category contrasts with “nonconclusive,” the designation for verbs like sneeze, flash, and nod, which do not imply a change of state. A verb that is “punctual” is not “durative”; durative verbs like drink and snow and improve take place over a usually brief period of time, while the punctual verb situation happens and is over: one arrives and that’s it—you’re there.

[Skip this part if a) these distinctions are quite clear now, thank you very much, and/or b) preposition are swell and all, but omg, please no.

Quirk et al. have a set of examples that clarify it all. Consider:

My car is at the cottage. —> cottage as dimensionless point

Our cottage is on that road. —> road as a line or surface

There is some ice on that road. —> road as surface

There is a new roof on the cottage. —> cottage as surface

There are only two beds in the cottage. —> cottage as area or volume

The cows are in the field. —> field as closed space, i.e., area or volume

We walked on the beach. —> beach as surface

Fascinating, right? We think so too.]

Prepositions of position, such as at, can accompany most verbs, but they are usually associated with verbs of stative meaning—words like be and live (e.g., “I am at home,” “I live on Main Street”). Arrive, it must be noted, is not such a verb.

Prepositions of destination, such as to, usually accompany dynamic motional verbs like go, move, fly (e.g., “I went into the store,” “She flew to Vegas”). Gosh, those verbs sure seem similar to arrive. Hmm.

And so it is that we arrive here: after all this investigation into the semantics of the verb arrive and the prepositions at and to, we find that what has been the usual preposition accompanying arrive in collocations having to do with destinations for centuries is seeing what may be a rising challenger that is arguably semantically more appropriate.

In news publications, which ostensibly tend to feature writing by trained writers who pay attention to style guides and may even have editors who fine-tune their work, “arrive at the scene” continues to be far more common than “arrive to the scene,” but the latter is increasingly used, and has seen significantly increased use over the course of the second decade of the 21st century. The same is true of the collocations “arrive into town” and “arrive onto the scene”: they both feature prepositions of destination, and they’re both on the increase.

Given all this, we can only arrive to the conclusion that English is always full of surprises. (We can still of course arrive at that conclusion as well.)