Once the same word, they now have very different meanings

Were you to make a Venn diagram of "people who use the words errant and arrant" and "people who are concerned about whether they are using errant and arrant correctly" it would be an almost perfect circle. There's a good reason for the confusion: for a considerable time, they both meant the same thing. Both words have been used since the 14th century, and arrant, at least early in its life, simply was an alteration of errant. 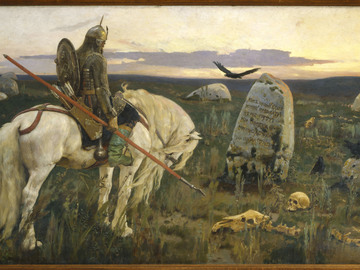 'Errant' originally meant "traveling"—a "knight-errant" was a knight who traveled in search of adventure.

This word has a split history: it comes from Anglo-French, a language in which two confusingly similar verbs with identical spellings ("errer") coexisted. One errer meant "to err" and came from the Latin errare, meaning "to wander" or "to err." The second errer meant "to travel," and came from the Latin iter, meaning "road" or "journey." Both homographs contributed to the development of errant, which not surprisingly has to do with both moving about and being mistaken.

The earliest sense of both errant and arrant was “traveling or given to traveling.” Etymologists believe that arrant came to take on its current meaning, "utterly bad," from the frequency with which this "traveling" sense of arrant modified words like thief (as in "a vagabond or wandering thief"). Errant, meanwhile, took on the additional meanings of “fallible,” “behaving wrongly,” and “straying.”

The first writer to notice that these two words were being confused—and that something should be done about it—was Robert Baker, who in his 1770 Reflections on the English Language wrote “These two Words are sometimes confounded by Writers,” and proceeded to try to explain how to differentiate between them. One of our oddest and least qualified grammarians, Robert Baker was a zealous guardian of the English language, unencumbered by much in the way of education. In the preface to his Reflections, Baker wrote “Now I confess that I am entirely ignorant of the Greek, and but indifferently skilled in the Latin, where I can construe nothing but what is easy,” and also informed his readers that “I quitted the School at fifteen.” He furthermore explained that, due to his being rather poor, “I have myself no Books.”

Perhaps understandably, few usage writers in the next 150 or so years took much notice of Baker’s call to distinguish between errant and arrant. The words appear to have naturally grown apart on their own. Now arrant is only used to mean "of the worst kind," whereas errant may mean "traveling," "straying," "moving aimlessly," or "behaving wrongly."

If that doesn't help, here's a limerick:

If you’re confused by arrant and errant,
And wish very much that you weren’t,
While both once meant “traveling,"
Through semantic unrav’ling,
This sense for arrant is no longer current.