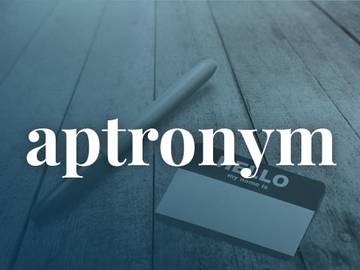 What does aptronym mean?

An aptronym is a name that suits its owner in an apt way.

The Greek word for “name” gave English the combining form -onym, perhaps most familiar as part of words like synonym (literally, “named with”) and antonym (literally, “named against”). There are a bunch of other “name” words made with this productive affix, like eponym (a word derived from a name, literally “named after”) and pseudonym (an assumed name, literally “lying name”).

An established pattern like this naturally leads to more and more words, and new ones do pop up, like retronym, for things that need to be specified after changes in technology, like “snail mail” or “acoustic guitar,” and demonym, for words that name the people from a certain place, like “Nevadan” or “Yooper.”

Where did aptronym come from?

Aptronym is a relatively new formation—with use that dates back to at least the 1950s—and may have been coined by the American journalist Franklin P. Adams. According to the Oxford English Dictionary, an entry for the word appeared in the Funk & Wagnall’s dictionary in 1921, apparently referring to names of trades or professions derived from their product:

a surname indicative of an occupation: as, Glass, the glazier.

How is aptronym used?

Aptronym is sometimes used in academic writing to refer to a name that fits some aspect of a character, as in Mr. Talkative and Mr. Worldly Wiseman in John Bunyan’s The Pilgrim’s Progress.

Aptonym: The similarity between a person’s name and occupation.
— Frank H. Nuessel, The Study of Names: A Guide to the Principles and Topics, 1992

This term is usually used, however, to refer to a person’s name and not their profession:

This phenomenon of a person’s name being a fitting description of their appearance, actions, or accomplishments is called an aptronym. Consider, for example, the felicitous fact that New York television personality Amy Freeze is a meteorologist. Or the famous example resulting from a Slate article that became a popular story in the Wall Street Journal’s Law Blog a decade ago when they learned of a lawyer named Sue Yoo.
— Theodore R. Johnson, Lexicon Valley, Slate.com, 14 March 2016

For such an apt word, it’s a bit surprising that English already has an established synonym for aptronym, one that goes back to the late 1800s: euonym, meaning “a name well suited to the person, place, or thing named.” This older word seems to be falling from favor in English as aptronym slowly gains acceptance. At least neither word appears to be a caconym.