The time Scalia took on the dictionary

Much has been said of the late Justice Antonin Scalia’s “originalist” or “textualist” interpretation of the Constitution, which he termed a “dead” document, arguing that its meaning did not change over time. Since the Constitution is composed of words, the natural extension of his argument is that words themselves do not change in meaning. We know that Justice Scalia loved words and dictionaries; his official portrait shows a copy of Webster’s New International Dictionary, Second Edition, Unabridged (1934; known as Webster’s Second) by his side. And his belief that words shouldn’t change meaning even once led him to criticize a Merriam-Webster definition in a court ruling. 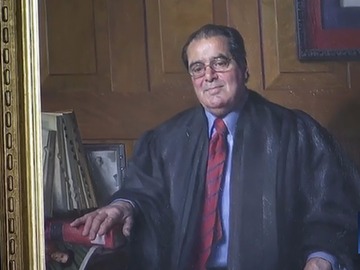 The conservative justice opposed the changes made to Webster's Third Edition, published in 1961, and was painted with his hand on Webster's Second (1934) in his official portrait.

The 1994 case was about deregulation of the long-distance telephone industry, and held that MCI and other new companies must abide by the same slow rate-setting schedule required by the FCC for the dominant company, AT&T. The dispute turned on the meaning of the phrase “modify any requirement” in the existing FCC law, with MCI claiming that modify could allude to substantial change and AT&T arguing that it could not. Both sides cited several dictionary definitions. Lawyers often seek out definitions that are worded in such a way as to support their arguments, and the citing of definitions had increased tenfold in Supreme Court decisions between the 1960s and the 1990s. Justice Scalia even coauthored an article about dictionary use in courtrooms. In his MCI opinion, he condemned a definition from the 1961 successor to Webster’s Second:

4 b : to make a basic or important change in : ALTER

Scalia wrote: “We disagree. The word modify—like a number of other English words employing the root mod (deriving from the Latin word for "measure"), such as moderate, modulate, modest, and modicum—has a connotation of increment or limitation.” One of his objections was that the definition seemed to contradict the one that precedes it:

4 a : to make minor changes in the form or structure of : alter without transforming

“When the word modify has come to mean both "to change in some respects" and "to change fundamentally" it will in fact mean neither of these things . . . Such intentional distortions, or simply careless or ignorant misuse, must have formed the basis for the usage that Webster’s Third, and Webster’s Third alone, reported.” Twisting the knife, he continued in a footnote: “Upon its long-awaited appearance in 1961, Webster’s Third was widely criticized for its portrayal of common error as proper usage.”

This was too much for Merriam-Webster’s Editor in Chief, the late Fred Mish, and he stepped in to respond, writing to New York Times language columnist William Safire: “We certainly think it is unfortunate that Judge Scalia found it necessary to serve up once more in a gratuitous footnote the always ill-founded and now very stale criticism of Webster’s Third that the book met when it was published in 1961.” (The dictionary’s debut was almost unanimously lauded by the scholarly community.) Pointing out that the examples given for the criticized meaning of modify included sentences by T. S. Eliot and the eminent linguist Edward Sapir, he went on, “If Judge Scalia wants to call this 'careless or ignorant misuse,' well, it’s a free country.” Mish’s defense of the split definition was uncomplicated: other dictionaries lumped the “minor” and “important” change meanings together, but “Webster’s Third simply made explicit what other dictionaries leave implicit.” This, he observed, was consistent with the descriptive philosophy of the book’s editors as well as the plain fact that, as by far the largest dictionary made in America, it had the space to draw such explicit distinctions.

We found in our archives a handwritten letter from Dr. Mish to Justice Scalia, drafted but apparently never sent: “We feel that we cannot let the matter pass without reply, as though we thought your rebuke merited and were grateful for the correction. We are not at all, I’m afraid, grateful and the rebuke is certainly not merited.” The letter goes on at length, presenting further examples of the word’s use and recommending scholarly articles explaining the validity of the approach of Webster’s Third. We’ll never know why he failed to send it.

As Mish wrote to Safire, “I regret having to say that Judge Scalia is in error on this matter, but at least he has the satisfaction of knowing that his error is not reversible by a higher court.” Safire titled his article “Scalia v. Merriam-Webster.”