An Explanation of Why We (Sometimes) Truncate Definitions

Or, why 'invitation' is "the act of inviting"

Historically, there has always been tension between utility and clarity in the editing of dictionaries. The basic expectation of a general purpose dictionary is a practical one: to include and define all the words of a language in current use. Dictionary publishers have always had to make decisions that allow for the inclusion of the maximum number of words in the dictionary’s limited space, so extremely careful editorial policies have evolved over time to save precious room on the page. Some of these decisions are fairly recent: the single-phrase definitions we use today are considerably shorter than the complete sentences of the past. But without question, the most important space-saving policy for dictionary editors is never to repeat a definition. 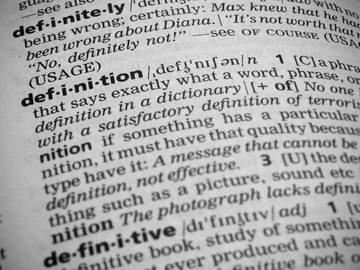 The most obvious consequence of this policy is that nouns like invitation, which are derived from verbs like invite, use the verb in the definition of the noun and that adjectives like reptilian, derived from nouns like reptile, use the noun in the definition of the adjective. This seems like circular logic and is understandably interpreted as a shortcut. Indeed, it is a shortcut, but it’s not the intellectual shortcut it may at first appear to be. It’s a radical abbreviation of information that is presented elsewhere. It’s a shortcut that, while it doesn’t get you to the destination faster, it allows for many, many other destinations.

Think of how much longer the dictionary would be if these root words were not used when defining other related words:

reptilian - 1. resembling or having the characteristics of any of a class (Reptilia) of cold-blooded, air-breathing, usually egg-laying vertebrates that include the alligators and crocodiles, lizards, snakes, turtles, and extinct related forms (such as dinosaurs and pterosaurs) and that have a body typically covered with scales or bony plates and a bony skeleton with a single occipital condyle, a distinct quadrate bone usually immovably articulated with the skull, and ribs attached to the sternum.

Phew. We define this sense of reptilian as "resembling or having the characteristics of the reptiles," which makes the entry considerably more manageable.

Online, dictionary entries appear in isolation, but on the printed page, they appear together. Words that are this closely related are also close on the page in alphabetical order, and users understand that connected words share basic elements of definitions. Because this is the way the language works, it’s also the way that dictionaries work.

Online dictionaries have been around for only about 20 years, and they are in debt to the stylings of their print forebears. One of the great advantages of online dictionaries is unlimited space for definitions, and, since those definitions often appear on separate pages from their root words, what had been a solution for space limitations has sometimes become a problem for easy understanding. Revisions and new definitions are written in ways that stand alone and avoid this problem, but even though we work all day every day on the dictionary, it will take a long time to completely untie this knot.

Avoiding repetition has long been an important rule for writing definitions, and that is the reason for the method to this apparent madness.