The Latin prefix "ambi-" means both and can refer to plurality. In ambivalent it refers to having mixed, contradictory, or more than one feeling about something. In ambiguous on the other hand, it means unclear or able to be understood in multiple ways.

Ambivalent and ambiguous have Latin to thank for the ambi part they share. In Latin ambi- means "both," but for this pair of words, the idea is plurality rather than exactly two. 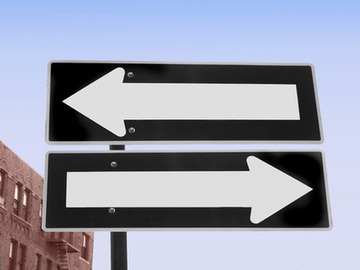 If you are ambivalent about something, you feel two ways about it. 'Ambiguous', on the other hand, means "unclear or capable of being understood in two or more different ways."

Ambivalent: More than One Feeling

If you are ambivalent about something, your feelings about it are contradictory or mixed: you feel two (or more) ways about it. The word typically describes a person or a person's attitude:

I'm ambivalent about going to the show. On the one hand, it would be fun. On the other hand, I really should stay home and get some work done.

I can't decide which pair of boots to buy—I'm ambivalent. One pair is reasonably priced, but not very stylish. The other pair is expensive but looks great. And the third pair is attractive and a bargain, but would only be good for dry weather.

She's deeply ambivalent about the issue and can argue both sides very effectively.

Ambiguous: More than One Meaning

Ambiguous, on the other hand, isn't a word used to describe people—though it is used to describe things people do or say. It's used in cases where the meaning of something is not clear, often because it can be understood in more than one way:

The ambiguous results of the study make it plain that more research is needed.

Their offer was ambiguous; were they suggesting that I borrow the car, or rent it from them?

The word may is ambiguous: it can be about permission—"you may go"—or about possibility—"it may rain."

Ambivalent is an early-20th century creation born from the field of psychology. The noun ambivalence came first and referred especially to contradictory feelings or attitudes that occur at the same time—such as a simultaneous attraction toward and repulsion from a person, object, or action. Ambiguous has been with us since the early 16th century.