We've had spelling bees for much longer than we've had the term 'spelling bee.'

The National Spelling Bee is this week, and once again, Americans unite to celebrate the joys of correct orthography. Shops are closed, bars are packed with avid spelling bee fans watching the competition, and if you haven't already spotted someone wearing a jersey with the name and number of their favorite speller, you just haven't been looking hard enough. 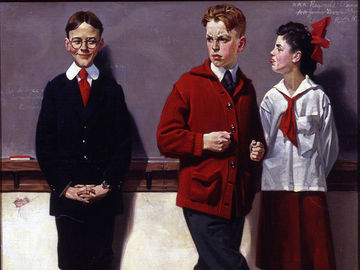 The 'bee' in 'spelling bee' is possibly an alteration of an English dialect word that meant “voluntary help given by neighbors toward the accomplishment of a particular task,” that word being a descendant of the Middle English word 'bene.'

We've been involved with the Bee since 1957, but the truth is that even then spelling bees were considered old-fashioned. In fact, many of our earliest examples of the phrase spelling bee in print modify it with the term "old-fashioned," which means that by the time we started to call them spelling bees, around the turn of the 20th century, people had already started to think of them as a quaint holdover from an earlier time.

Here are some of the things people called spelling bees before the name spelling bee became common:

Perhaps it's good that we settled on bee. It's buzzy, it's simple; it's easy to spell. It's also a word with an upbeat, positive meaning: the word bee is possibly an alteration of an English dialect word that meant “voluntary help given by neighbors toward the accomplishment of a particular task,” that word being a descendant of the Middle English word bene. Bene also gave us the word boon, understood today to mean “blessing,” but which also has the meaning of “benefit” or “favor.” The word has historically been used to describe group activities (a “quilting bee”) or occasions when farmers or neighbors would help each other, such as a “husking bee,” “apple bee,” or “raising bee.” As if to prove that no word can be upbeat and positive 100% of the time, we also have historical evidence of "hanging bees" and "lynching bees." Of course we do.

Best of luck to all of this year's spellers. If you're playing along at home, test your own spelling skills with our Spell It game, or take a look at these winning words from previous Spelling Bees. Above all, try not to take the competition too seriously. Remember, it's just a spelling combat fight trial bee.