'All the Feels,' All the Time

Exactly how many feels are you feeling?

Oh, Internet, how we love you so. Who can define words when there are cat photos to gush over? Who can concentrate on etymology when there are recaps to read? When there are songs to stream that speak to us like no other song has spoken to us before? 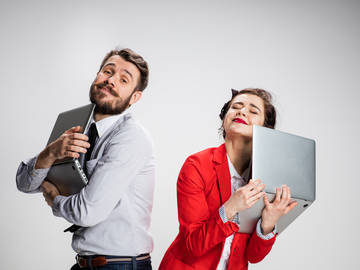 Hold that computer tight. Don't let any of the feels spill out onto the floor.

When one encounters such distractions, one can't just feel something for them–one has to have all the feels.

I'll tell you, when I was first reading this, I wasn't sure what to do. Because I know you, and I've read all your books, and then here's this novel. And it's had such big fanfare. "George Saunders has a new novel, and I have all the feels," that sort of thing.
Kevin Larimer, Poets & Writers, March/April 2017

Yes, that sort of thing.

Here's how this epidemic of the feels started. Feel, in this instance, is short for "feeling" or "emotion" and traces back to a meme created in 2010 by a user on a German image site. The image in question featured two embracing men along with the caption, "I Know That Feel Bro."

The meme came to be used as a shorthand for expressing empathy, particularly between strangers online. Internet memes are noted for their playful use of disjunctive grammar–remember I CAN HAS CHEEZBURGER?–so it is possible that feel was used in place of feeling for that same reason.

Feel already sees plenty of use as a noun, from meanings such as "sensation" (the feel of old leather) to "a particular quality or atmosphere" (an inn that has all the feel of a castle) to "an intuitive knowledge of ability" (has a feel for woodworking).

But in all the feels (along with right in the feels, whose original corresponding image suggested an application to a specific part of the anatomy), the word feel jumps out because it is used in a way it's hardly ever used in any of those other senses: as a countable noun in its plural form. The phrases soon took on lives of their own in meme culture; as Katy Waldman wrote in Slate, they tap into the Internet's capacity for having its way with our emotions:

Feel some feels. Along with all the feels and right in the feels, the phrase is everywhere, especially online. I could have picked any number of tweets or posts to back into a discussion of feels, but there’s something right, I think, about siphoning from the molten geyser of emotion unleashed by the Web’s controversy du jour, a polemic animated, in fact, by the belief that our sensitivities--our feels--are clouding reason, strangling dialogue.
Katy Waldman, Slate, 29 Jan. 2015

Whether dismissive or not, now our feels are being felt all over the place:

Whether you're debating re-reading Harry Potter or just want to take a trip down memory lane, the quotes below will hit you right in the feels.
Kristian Wilson, Bustle, 9 May 2017

If that tear-jerker has you feeling all the feels, just wait for this one: The finale also includes Spencer quoting the Winnie the Pooh line, "How lucky am I to have something that makes saying goodbye so hard?" Sob.
Suzannah Weiss, Teen Vogue, 27 May 2017

Just when you thought you couldn’t get kicked any harder in the feels, the story inside the magazine ― featuring love letters from the likes of Rashida Jones, Gloria Steinem, Chimamanda Ngozi Adichie and Jon Meacham ― will really get you.
Jamie Feldman, The Huffington Post, 25 Oct. 2016

But rom coms like How to Lose a Guy in 10 Days have a reputation for being stupid, far-fetched, and just plain bad. That's just not true! Some are hilarious. Others punch you right in the feels. Either way, they're real films with actual plots capable of moving you, just like those prestige male-centric dramas everyone pretends to love.
Christopher Rosa, Glamour, 9 Feb. 2017

Only time will tell if the feels will last long enough to warrant a new entry in the dictionary. But for now, to quote Spencer, how lucky are we to have something that makes saying goodbye so hard?