A word for the charmingly awkward 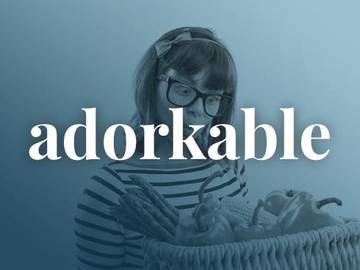 What does adorkable mean?

Adorkable describes someone who (or something that) is charmingly or appealingly awkward or unstylish.

Where did adorkable come from?

There's nothing mysterious about the etymology of adorkable. The word is a portmanteau—also known more technically as a blend—of adorable and dork. Adorable first came on the scene more than 300 years ago, entering the language with the meaning of "worthy of adoration or veneration," and being applied mostly to one's preferred deity. It wasn't until a century and a half later that its "extremely charming or appealing" meaning began to take hold. Dork is of course much newer, and lacking in any kind of historical refinement: it's been used as a synonym of nerd ("an unstylish, unattractive, or socially inept person and especially one slavishly devoted to intellectual or academic pursuits"), and less frequently jerk ("an annoyingly stupid or foolish person") since the second half of the 20th century.

We don't know who first combined adorable and dork to form adorkable, but our preliminary research dates the term to the early part of the current century:

[Interviewer B. J. Sigesmund] Your character has been called "one of the most endearing nerds ever to stumble through a series."

[Adam Brody] That feels great. Someone called me "adorkable." Anyone who says they don't care about reviews or feedback is either lying or an idiot.
— Newsweek, 22 Sept. 2003

Evidence of use in the early aughts shows adorkable being frequently applied to men, such as Brody, as seen above, and American Idol star Clay Aiken, but in the second decade of the century the word got firmly pinned to Zooey Deschanel's character, Jess, in the show "New Girl," which ran from 2011 till 2018. Marketing was involved in the pinning: promotional materials featured the words "SIMPLY ADORKABLE" above the show's title.

How is adorkable used?

The sweet, goofy “Share Your Address,” where Platt declares, “I want a key to your house” and “I wanna be your emergency contact,” feels authentically offbeat. Maybe Platt wants to add suave pop star to his growing lists of accomplishments someday, but, for now, his adorkable realness works just fine.
— Glenn Gamboa, Newsday, 27 Mar. 2019

The show’s boisterous ensemble, composed of four teenage girls and one fish-out-of-water English boy, navigates the trials of a Catholic high school and the encroaching presence of a militarized British state. Erin … ostensibly leads the group, jotting quirky observations in her diary, while her shyish cousin Orla, played by a riotously adorkable Louisa Harland, is lost to an obsession with aerobics.
— Nathan Dunne, Slate, 6 Mar. 2019