A Word for Halloween: Scarify

Use this word. We dare you.

Oh, sorry—did I scarify you?

Yes, I did say "scarify." Scarify rhymes with terrify, and has a meaning that sits somewhere between that word and the scare that birthed its first syllable. 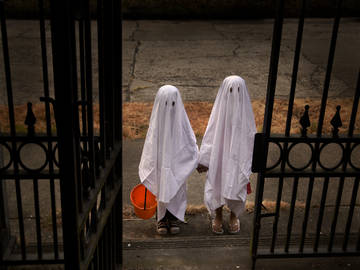 'Scarify' is a little-used verb that means "to scare or frighten." While we're usually detached observers of language, we're going to make an exception here: use this word. Use it today.

Meaning and Origin of Scarify

It's not a common word, but it's more than 200 years old, and it's every bit as good a verb as its synonyms, frighten, spook, and the like. Usually, though, it appears in its present participle form, scarifying, as an adjective:

After father and son leave the bunker and loved one—on ice—the novel trumps its scarifying first half with a few pages so surprising a reviewer shouldn't give the game away.
— John Domini, The Philadelphia Inquirer, 6 May 2016

But, wait! There's more! The most scarifying tale of the evening will also win a Courthouse Pub gift card! And as always, all storytellers receive a free pint of the beer of their choosing. How frighteningly tempting!
— Tim Gadzinski, Herald Times Reporter, 10 Oct. 2019

Note that this scarify isn't the only scarify in town: there's an older one (as in 15th century old), and its basic meaning is "to make scratches or cuts in." You can see its full definition here. (Don't be scared to click on that link.)