October 7, 2017 marks our 4,000th Word of the Day podcast. Here, editor-at-large (and podcast host) Peter Sokolowski reflects on what he's learned from ten years of talking to himself.

Turning the information found in a dictionary into a comprehensible spoken-word presentation isn’t easy. Actually, let’s back up and say that speaking out loud at all doesn’t come naturally to most working lexicographers: the editorial floor at Merriam-Webster is a virtually silent workplace. However, for a podcast of our popular Word of the Day e-mail, I’ve been recording a version of the e-mailed text for about ten years. (It can be heard via iTunes or by clicking here.)

Sitting by yourself in a room and speaking out loud can seem strange. For the first year or so, I recorded them in a studio with a professional sound engineer, who also provided the musical theme for the podcast. When we switched to recording in-house, we bought a good microphone and I learned Pro Tools (to add the music and the credits originally voiced by colleague Emily Brewster). With some technical advice from Syd Seale of our electronic publishing team, I learned to actually serve as my own engineer.

With the new equipment in place, one question remained: where to record? 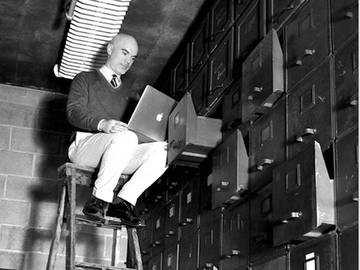 The author at work.

Disturbing the peace of the silent editorial floor was obviously out of the question. And since anything from a delivery truck to a slamming door to a flushing toilet can spoil a recording, an isolated and insulated spot was essential. We checked every corner of the building before discovering, deep in the basement, the only place without noise from ducts or fluorescent lights or practically anything else: the company’s sepulchral records vault.

Among the challenges of recording the podcasts, some have to do with the mechanics of using a microphone. In particular, I have to be careful to avoid “popping” plosives: the letters p and b can become little explosions when the microphone picks them up. (You just try to say “pusillanimous pussyfooting” into a microphone without popping a p.) I’ve found that the best solution is to start such sounds without completely sealing your lips – it feels funny, but the recorded results sound normal.

Conversely, some sounds seem to vanish inexplicably on playback; I need to emphasize the second f in fifth so that it doesn’t come out sounding like fith. I also make sure to spell out words (like wry) that have homophones so as not to cause confusion. Speaking clearly is important, as we’ve been informed over the years that many students of English listen to the podcast to help them with the sound of the language.

The bigger challenge is finding a friendly and conversational way to present a text that is often dense with etymological facts to a listener who may be driving or working out at the gym. Since it can be hard to digest several inflections of ancient words coming at you in quick succession (“Phatic derives from the Greek phatos, a form of the verb phanai, meaning ‘to speak’”), I sometimes feel the need to simplify (“Phatic derives from the Greek word meaning ‘to speak’”). For the French root of debacle, I don’t need to give both débacler and its earlier form and homophone desbacler; I simply say the modern word derived from Middle French.

The Word of the Day is a celebration of word histories, and French, Latin, and Anglo-Saxon roots create a sound map of the human history embedded in English. Hearing the sound of a language’s evolution can set the podcast apart from its email version, so when I pronounce roots I try to do them justice. Since my own background is in Romance languages, I’m sometimes out of my depth with words of Germanic origin (such as midriff, which has the Old English hrif and the Old High German href in its history), so I occasionally get a mini-course in phonetics from my colleagues before going down to record.

The best part of this assignment is the exposure to such a variety of words on a regular basis. Much of the work we do as dictionary editors involves words that we don’t use ourselves, and we end up spending lots of time in strange and specialized corners of the English language. The words in my podcasts don’t often become part of my active vocabulary – though I may work for a reference publisher, I’m not a work of reference – but the few minutes I spend with each one is always time well spent.