10 Words That Prove Fame Isn't Everything

Not all publicity is good 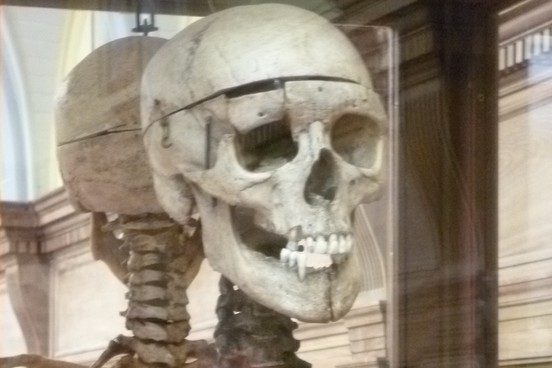 The preserved skeleton of William Burke.

Definition: to murder by suffocation or strangulation in order to obtain a body to be sold for dissection

When an elderly pensioner died at the Edinburgh boarding house of William Hare in 1827, the proprietor and his friend William Burke decided to sell the body to a local anatomy school. The sale was so lucrative that they decided to make sure they could repeat it. They began luring nameless wanderers (who were not likely to be missed) into the house, getting them drunk, then smothering or strangling them and selling the bodies. The two disposed of at least 15 victims before murdering a local woman whose disappearance led to their arrest. At Burke's execution by hanging, irate crowds shouted "Burke him!" As a result of the case, the word burke became a byword first for death by suffocation or strangulation and eventually for any cover-up.

In a grisly twist—and as part of his punishment—Burke himself was dissected after his execution. His skeleton, pictured above, hangs in the Anatomical Museum of the Edinburgh Medical School; his skin was supposedly turned into wallets, calling-card cases, and a pocketbook.

“Why sir, bless your innocent eyebrows, that’s vere the mysterious disappearance of a respectable tradesman took place, four year ago.”
“You don’t mean to say he was burked, Sam?” said Mr. Pickwick, looking hastily around.
—Charles Dickens, The Pickwick Papers, 1837 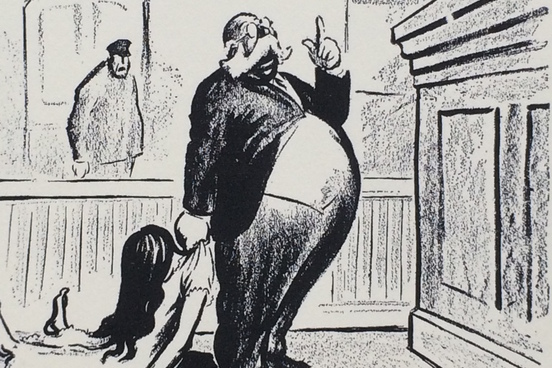 Cartoon depicting Comstock. "Your honor, this woman gave birth to a naked child!" The Masses, 1915

Definition: censorious opposition to alleged immorality (as in literature)

Anthony Comstock is often described as having been a “social reformer,” which is a bit unfair to non-hysterically-puritanical social reformers the world over. As a special agent for the U.S. Post Office and the founder for the Society for the Suppression of Vice, Comstock made it his life’s work to root out obscenity in late 19th and early 20th century America. His efforts were not applauded by all, as is evidenced by the meaning taken on by his name. George Bernard Shaw is popularly credited with having coined this term (he wrote “Comstockery is the world's standing joke at the expense of the United States” in The New York Times in 1905), although it was in use at least a decade prior to then.

We observe with pleasure that in a more recent case of what will be readily understood if classified as Comstockery Justice Jerome has expressed the opinion of sane persons; and with pain that his colleagues on the bench have outnumbered him.
—The New York Times, 12 December, 1895 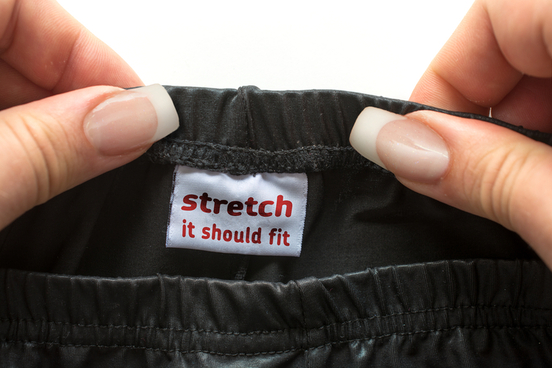 Procrustean comes from the name of a legendary robber, Procrustes, who resided in Attica in ancient Greece, and who had a particularly unwelcome manner of treating his guests—who were anyone he managed to capture. He fixed them to an iron bed, stretching those who were too short to take up its length (which is more uncomfortable than it sounds) and chopping off pieces of those who were too tall to fit. His name was stretched into an adjective in the middle of the 17th century. Procrustean describes anything that takes no account of individual differences but cruelly and mercilessly makes everything the same.

Procrustean measures can have no place here.
—Atticus Greene Haygood, Our Children, 1894 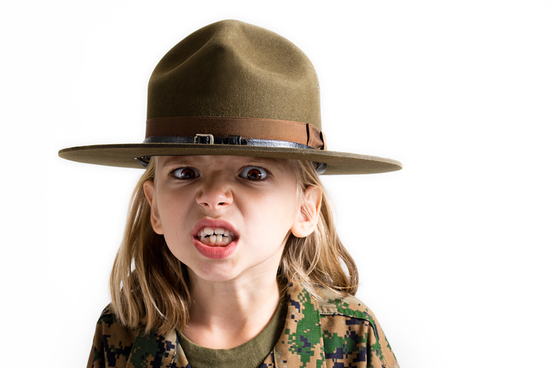 Definition: one who lays stress on a rigid adherence to the details of forms and methods

It takes a special kind of person to be so despised by one’s subordinates that one’s name becomes synonymous with “nitpicking-meanie.” Such a person was Jean Martinet. In the 1660s King Louis XIV appointed Martinet to be in charge of training his infantry, and the drillmaster set to his task with gusto, insisting on rigid adherence to form and ruthlessly punishing offenders. The measure of his success depends somewhat on the point of view you take; although he did manage to turn his charges into a competent fighting brigade, they ended up killing him during the siege of Duisburg in 1672. Martinet has been used to mean "strict disciplinarian" since the 1730s.

“Papa is such a martinet. He declares that I shall never marry a man who has not some regular business.”
—Thomas Masson, Munsey’s Magazine, January, 1910 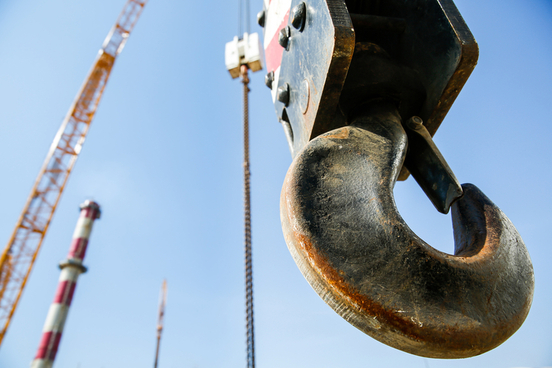 Definition: a tall machine with a long part like an arm that is used to move or lift heavy things especially on ships

During the reign of Queen Elizabeth I, London was the home of a notorious executioner named Derick. Among those he beheaded was the Earl of Essex, Robert Devereux, who according to a street ballad of the time had once saved the life of the ungrateful executioner. While members of the nobility were accorded the courtesy of beheading, it was the lot of commoners to be hanged, and those sent to face the rope at the hands of the executioner Derick nicknamed the gallows at Tyburn after him. Throughout the 17th century, "derick" was used as a name for both hangman and gallows. After the days of public hangings, the word derrick was adopted as a name for a number of less ominous frameworks or towers.

Such as climbe aboue their reach shall be sure of a counterchecke, and such as plot treachery shall haue a halter for their labour, and Derick shal make them shorter not by the hayre, but by the head.
—Anthony Nixon, The Blacke Yeare, 1606 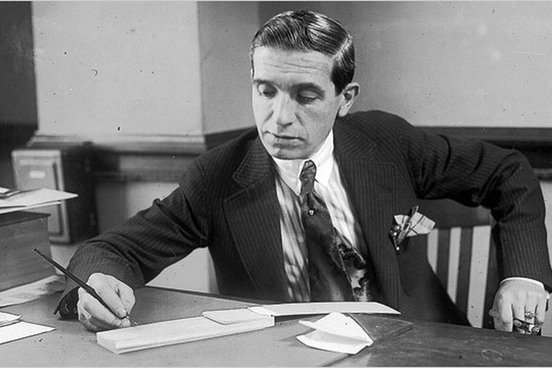 Definition: an investment swindle in which early investors are paid with sums obtained from later ones in order to create the illusion of profitability

It is certain that Charles Ponzi was not the first person to attempt to become wealthy through a pyramid scheme, but he was successful enough (at first, at least) that his name has become a byword for this particular form of financial chicanery.

Ponzi, who was born in Italy with the name Carlo Pietro Giovanni Guglielmo Tebaldo Ponzi, came to the United States in 1903. Following a series of unsuccessful ventures he established a company in 1919 which promised investors spectacular returns (50% within three months), and which enjoyed a brief period of taking in significant amounts of money. Ponzi’s scheme quickly unraveled, and he was subsequently convicted of mail fraud.

Nobody charged that they had been beaten out of any money, yet Mr. Schuyler, out of a clear sky, sailed into C. M. A. like it was a Ponzi scheme.
—Atlanta Daily World, 15 June, 1932 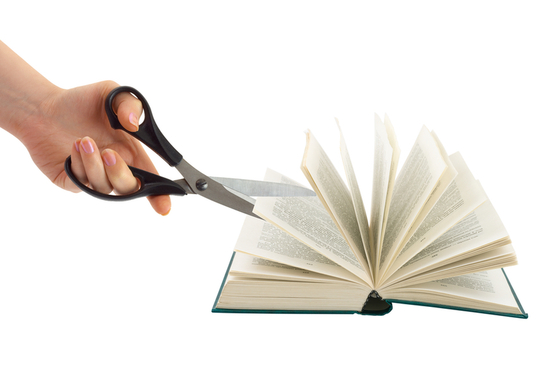 Definition: to expurgate (as a book) by omitting or modifying parts considered vulgar

Thomas Bowdler was an English physician, and fancied himself a man of letters as well. Disapproving of the somewhat ribald nature of Shakespeare’s works, but interested in allowing children and other delicates to read them, he published his own version in 1818. Through rephrasing, omission, and outright cutting out of the naughty bits Bowdler was finally able to come up with an edition of Shakespeare that he felt comfortable reading with his family, and managed to forever enshrine his name with censorship to boot. Within 11 years of his death in 1825, the word bowdlerize was being used to refer to expurgating books or other texts. 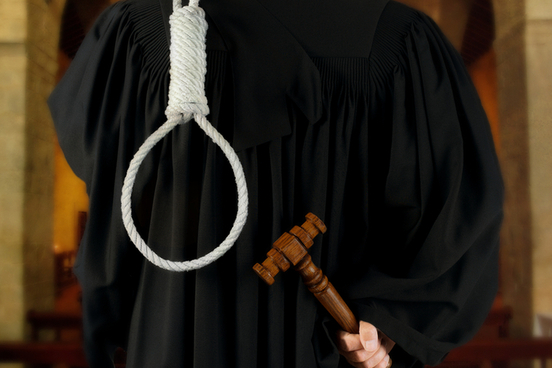 Definition: 1. of, relating to, or characteristic of Draco or the severe code of laws held to have been framed by him 2. Cruel, severe

Draco was an Athenian lawgiver in the seventh century B.C.E. Interested in reforming the criminal justice system he came up with a comprehensive set of laws. He advocated for such extreme punishments that his name came to be associated with judicial severity. What Draco lacked in compassion he made up for in consistency: almost all criminal offenses, both trivial and serious, called for the death penalty.

The Draconian punishment of death was the lot of any one breaking “the tapu,” whether wilfully or unintentionally.
—Sir William James Tyrone Power, Recollections of a Three Years’ Residence in China, 1853 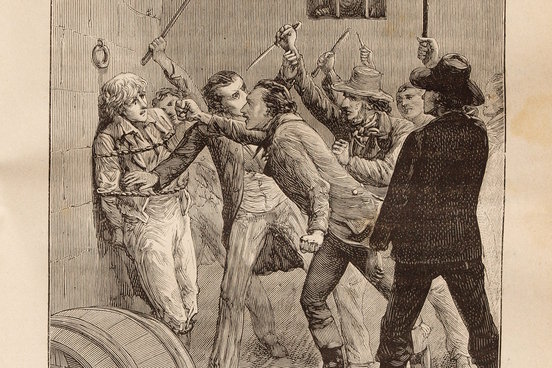 "The Assassination of William Morgan" by Pierre Méjanel, 1886

Definition: to assassinate or do away with secretly in order to prevent or punish disclosure of secrets

The name of William Morgan differs from most of the other names found here, as he lent his name to our language due to something objectionable being done to him, rather than by some objectionable action on his part. In this case the objectionable thing was that he was murdered. Morgan was a leader of the Antimasonic movement in 19th century America (this movement was, as the name suggests, concerned with thwarting the influence of the Freemasons). After having been excluded from the Freemasons, Morgan came to believe that the organization was a social detriment, and worked to expose what he saw as its pernicious effects. Morgan was abducted from jail in 1826 and subsequently found dead, in Lake Ontario. Shortly after, his name became synonymous with a sort of preventative assassination.

It is our mode of doing things to follow the strict line of duty, and the threat of being “Morganized,” will not deter us.
—F. F. Backus & Samuel Works, The New England Galaxy, 9 Mar., 1827 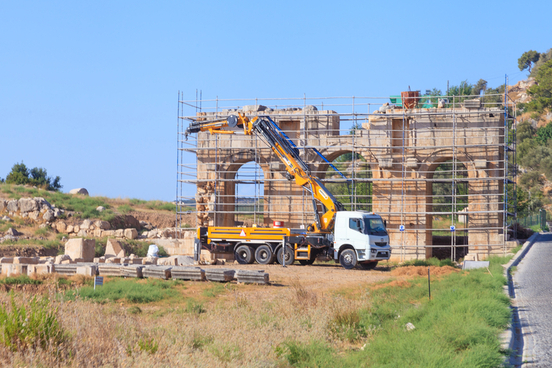 Definition: to remodel (an ancient building) without proper knowledge or care to retain its original quality and character

Grimthorpe is taken from the title of the man who inspired it: Sir Edmund Beckett, the first Baron Grimthorpe. The Oxford Dictionary of National Biography describes Beckett as an “ecclesiastical controversialist” (among other things), which is a polite way of saying that many people disagreed with certain beliefs he held, and among these were his views on architecture. The Baron was passionately interested in this subject, and not shy of making his opinions known. After he had given a large amount of money, and a similar amount of unwanted suggestion, to the restoration of St. Albans Abbey in the 1880s, his name became synonymous with the slipshod restoration of an ancient building.

Unfortunately, it is still possible for a noble fabric like St. Alban’s Abbey to be "Grimthorped" almost out of recognition for the amusement of a wealthy iconoclast.
—The Westminster Budget, 25 Sept. 1896