As singular they becomes more widely accepted—and increasingly adopted formally by even traditional news outlets—the reflexive pronoun that logically goes with it is gaining traction too. 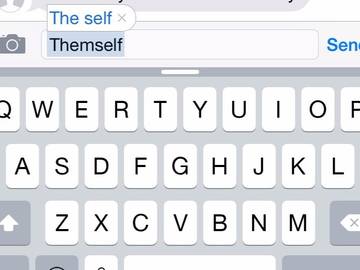 • myself • yourself and yourselves • himself • herself • itself • ourselves • themselves

Only the dual-purpose your* has two reflexive forms: singular yourself and plural yourselves.

Except that's not quite true. When people want a reflexive pronoun to go with singular they and them, themself sometimes gets called upon to do the job—though if you're doing the calling upon while typing, your computer/phone/tablet is going to be sure you meant themselves.

Eventually, themselves became the only accepted form. But themself never fully disappeared. Here it is in use by two well-known American writers:

After infinite wanderings the little note has reached us…. Almost anyone under the circumstances would have doubted if [the letter] were theirs, or indeed if they were themself—but to us it was clear.
— Emily Dickinson, letter, 24 Sept. 1881

Boys like to talk about themselves—much more than girls. A girl once named Helen Walcott, told me (and she was the most popular debutante in Washington one winter) that as soon as she got her man talking about himself she had him cinched and harnessed—they give themself away.
— F. Scott Fitzgerald, letter, circa 1915

In more recent years we've collected a smattering of evidence of it in publications like The New York Times and The Washington Post. Yet themself remains quite rare in published, edited text. When it's found in a major newspaper, it's almost always in quoted text. The exceptions to this rule are the cases in which themself is intentionally used for someone whose preferred pronoun is they.

Will themself make a comeback? It's too soon to tell. In the meantime, those who find themselves using it shouldn't be too hard on themselves.