From 'Syllabub' to 'Sundae': A Dessert Course in 7 Words

We all scream for ... affogato? 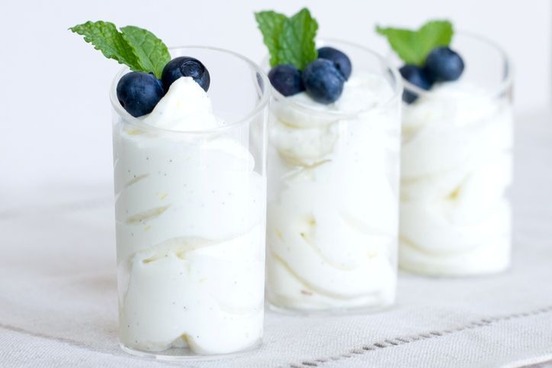 It can be hard for the uninitiated to read the definition of syllabub (also spelled sillabub) and think "ooh, that sounds like a tasty treat!," but as far back as the 1530s syllabubs were popular tasty treats indeed. The late 19th century Cassell's Dictionary of Cookery includes no fewer than 14 recipes for various kind of syllabubs, among them "Birthday Syllabubs," "Devonshire Syllabubs," "Syllabubs that will keep a week or ten days," and "Syllabubs under the Cow." This last recipe instructs the reader to take a punch bowl (into which various amounts of sugar, lemon juice, sherry, brandy, cream, and egg white have been mixed) "to the dairymaid, and let her milk the cow into the bowl until it is quite full. Put it away, and let it remain untouched till the following day. Grate a little nutmeg on the top, and serve." The word syllabub is of unknown origin. 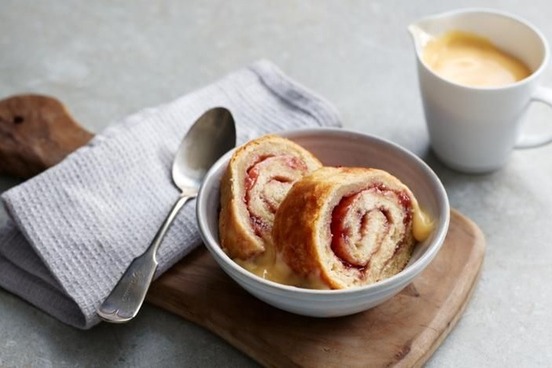 : a sweet dough spread with a filling, rolled, and baked or steamed

It would be hard not to love a dessert with a name like roly-poly. The toothsome treat, which appears to date to the early part of the 19th century, is also called roly-poly pudding. (Pudding in this case refers to a dish typically made with suet or having a suet crust and originally boiled in a bag.) Before the noun referred to a dessert it referred to a roly-poly person—that is, to a rotund person or thing. While roly-polies can be filled with any variety of nice things, the Internet mostly has recipes for jam roly-poly. 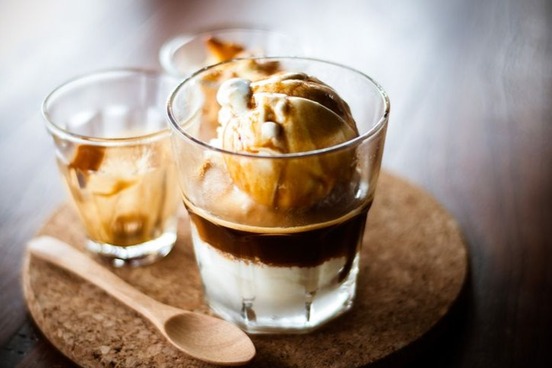 : an Italian dessert of vanilla ice cream over which espresso has been poured

Affogato is for when you're ready for dessert but not ready for the night to be done. While we don't know how long the Italians (from whom we borrowed the word and its referent) have been making affogato, we do know that its introduction into English dates back only a few decades into the late 20th century. The Italian word means literally "drowned": in Italian compounds like gelato affogato and affogato di gelato the sinister quality of the word is tempered by the fact that drowning ice cream in something delicious is nearly always a good idea. (Note that gelato is a dense and rich ice cream for which Italians also get the credit.) 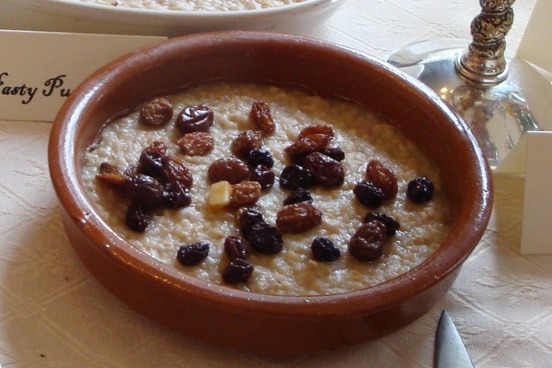 : a dish of wheat boiled in milk and usually sweetened and spiced

There's nothing like the definition of frumenty to make a person suspect that they might be living in a golden age of desserts, comparatively speaking. But frumenty (the dish is also styled as furmity) has a track record that's hard to beat. The word, and the dish, date to the 14th century, and people still cook it today. The word's origin lies in Latin: frumentum means "grain" or "wheat." 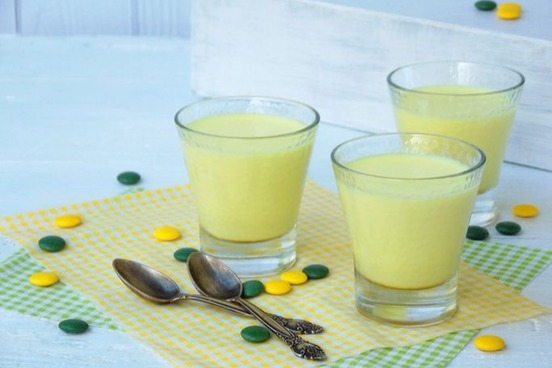 : a dessert of sweetened flavored milk set with rennet

In most cases, when you see the word junket it's referring to a trip or journey paid for by someone else. When it's referring to something sitting on the table in front of you, though, it's another thing entirely—namely, a sweetened flavored milk that has magically taken on a jelly consistency (the magic being courtesy of rennet). What's remarkable is that the meanings are related. Here's how the story goes:

Long ago a type of cream cheese was prepared in baskets made of rushes or reeds, and the cheese took its name from its container: the Latin juncus meaning "rush." In Italy in the Middle Ages this cream cheese was called giuncata, a derivative of Latin juncus. It was probably from this Italian source that Middle English got ioncate, which evolved into junket. Junket, first referred to cream cheese but later became the name of that jelly-like dessert your great-grandmother was partial to.

In the mid-16th century, junket was a popular term for any sweet dish, as we see in William Adlington's translation of “The Golden Ass of Apuleius” (1566): "Bread pasties, tartes, custardes and other delicate ionckettes dipped in honie." From this sense of junket developed the extended sense "a feast or banquet," and later referred to mobile versions of the same: picnics and outings where lots of eating and drinking were done. From there, junket came to refer to pleasure trips generally. Pleasure trips being most pleasurable when paid for by someone else, the word eventually settled into it most common current meanings, referring to trips paid for by someone other than the person doing the traveling—especially government officials traveling on the public's dime. 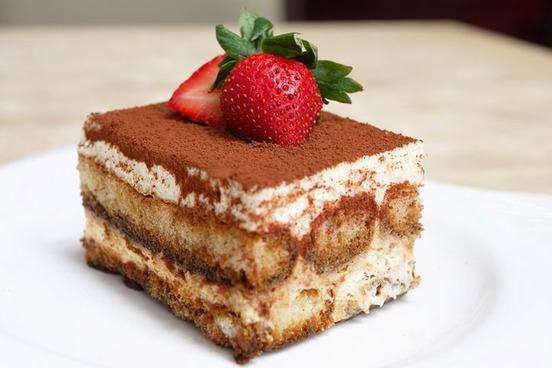 : a dessert made with ladyfingers, mascarpone, and espresso

Tiramisu—both the word and the food—is a gift from the Italians that didn't make it into the English lexicon (or onto English menus) until the 1980s. English speakers know they want to eat it, but they can't quite agree on how to say that name. The following pronunciations are all established in English: \ˌtir-ə-ˈmē-(ˌ)sü\, \ˌtir-ə-ˈmi-(ˌ)sü\, and \ˌtir-ə-mē-ˈsü. The word's Italian ancestor, tiramisù comes from an evocative phrase: tirami su! means literally "pull me up!" 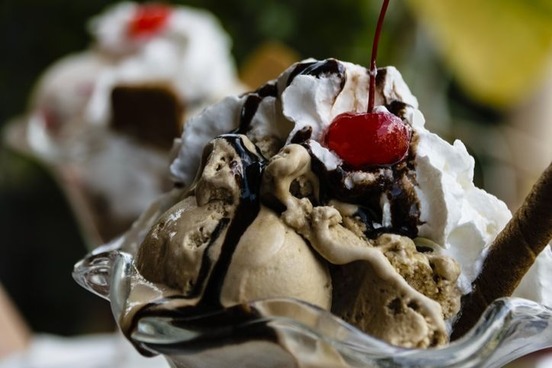 Our colleagues at the Oxford English Dictionary have the story behind sundae. According to their research, the name of the delectable known originally as a "Sunday" apparently got its name because it was first served on a Sunday. They even know the date: it was April 3, 1892, and John M. Scott, a pastor at the Unitarian church in Ithaca, New York, had determined that his sermon would be appropriately followed by a visit to Platt and Colt's Pharmacy. It was there that Platt and Colt's proprietor, one Chester C. Platt, is said to have made and served the first Sunday. According to a letter from a patent attorney Mr. Platt knew he was onto something big: he sought advice on trademark protection for the use of "Sunday" in reference to ice-cream treats.

The reason for the adoption of the current sundae spelling is unknown, but the OED suggests three possibilities: other retailers didn't want to risk running amok of a trademark rule; Sunday's reputation as a day of abstinence might have been a problem for religious people who wanted to indulge in the dish; or it may have been considered better able to catch people's attention. We like that it makes it easier to style the word in lowercase: majuscular pretension has no place in an ice cream sundae.