GAMES BROWSE THESAURUS WORD OF THE DAY WORDS AT PLAY SETTINGS
Word of the Day : March 13, 2019

: of, relating to, or being a situation (such as a game or relationship) in which a gain for one side entails a corresponding loss for the other side

Does game theory sound like fun? It can be—if you are a mathematician or economist who needs to analyze a competitive situation in which the outcome is determined by the choices of the players and chance. Game theory was introduced by mathematician John von Neumann and economist Oskar Morgenstern in their 1944 book The Theory of Games and Economic Behavior. In game theory, a zero-sum game is one, such as chess or checkers, where each player has a clear purpose that is completely opposed to that of the opponent. In economics, a situation is zero-sum if the gains of one party are exactly balanced by the losses of another and no net gain or loss is created. (Such situations are rare.)

"Among the greatest risks posed by a new recession is that governments may engage in a zero-sum war for spending. Unable to overcome the technical and political hurdles to creating more money at home, they might opt to suck in money from abroad." — The Economist, 13 Oct. 2018

"The industry conflict is too often framed as physical retail versus online retail. Statistical analyses of the growth of e-commerce almost always get coupled with a story surrounding the decline of physical retail, with a heavy focus on the closure of malls. These two things are undoubtedly linked, but experts often communicate this as a zero-sum game. This ignores a fundamental human truth: People now and into the future will continue to leave the house and shop in physical retail." — Warwick Heathwood, Adweek, 18 Apr. 2018

What word is the name for the number 0 and also for a message in code? 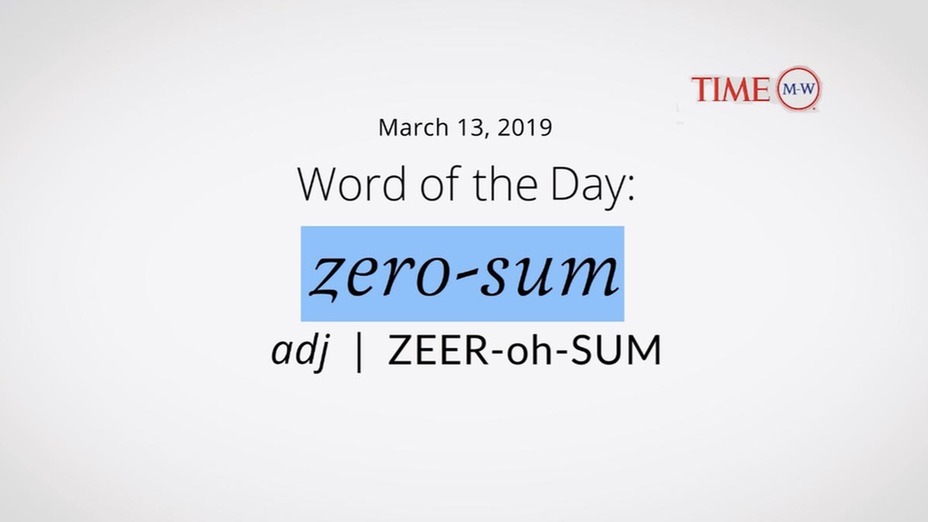 adj. - being gain for one and loss for another