GAMES BROWSE THESAURUS WORD OF THE DAY WORDS AT PLAY SETTINGS
Word of the Day : October 23, 2019

: a transposition of usually initial sounds of two or more words (as in tons of soil for sons of toil)

Poor William Archibald Spooner! That British clergyman and educator, who lived from 1844 to 1930, often had to speak in public, but he was a nervous man and his tongue frequently got tangled up. He would say things like "a blushing crow" when he meant "a crushing blow." Spooner's sound reversals became the stuff of legend—and undoubtedly gave his listeners many a laugh. By the end of the 19th century, his name had inspired the term spoonerism, which lives on to this day.

"The girlfriend is part of the origin story of Ritt Momney [instead of Mitt Romney]. That was the name Rutter and his friends at East High School gave to the band they formed their junior year. There wasn't much of a thought process behind the name, a spoonerism of Utah's junior senator and the czar of the 2002 Winter Olympics in Salt Lake City." — Sean P. Means, The Salt Lake Tribune, 14 July 2019

"Spoonerisms … occur when the first letter or letters of at least two words are transposed to form a nonsensical or humorous new phrase. My favorite, from childhood, is the usher who offers to 'sew you to your sheets' instead of show you to your seats.…" — Caitlin Lovinger, The New York Times, 7 Apr. 2018 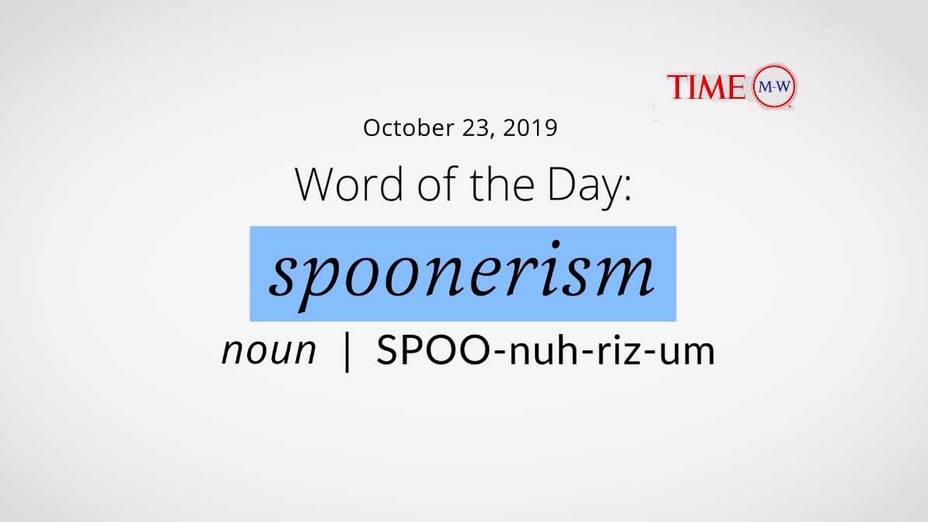