GAMES BROWSE THESAURUS WORD OF THE DAY WORDS AT PLAY SETTINGS
Word of the Day : July 9, 2013

1 : a body of heavily armed infantry in ancient Greece formed in close deep ranks and files; broadly : a body of troops in close array

2 : one of the digital bones of the hand or foot of a vertebrate

3 a : a massed arrangement of persons, animals, or things

b : an organized body of persons

The original sense of "phalanx" refers to a military formation that was used in ancient warfare and consisted of a tight block of soldiers standing shoulder to shoulder, several rows deep, often with shields joined. The word "phalanx" comes from the Greeks, though they were not the only ones who used this formation. The Greek term literally means "log" and was used for both this line of battle and for a bone in a finger or toe. The word and its senses passed into Latin and then were adopted into English in the 16th century. These days, a "phalanx" can be any arranged mass, whether of persons, animals, or things, or a body of people organized in a particular effort.

A solid phalanx of armed guards stood in front of the castle.

"In past years I’ve spotted Oprah Winfrey, or the specter of her anyway, dressed in blazing yellow and surrounded by a phalanx of large, black-suited bodyguards, her filtered image shimmering like the sun peeking through a forest of towering Versace-clad sequoias." - From an article by Laura Rafaty in the Napa Valley Register, June 4, 2013

What former Word of the Day begins with "h" and means "to lift or raise"? The answer is … 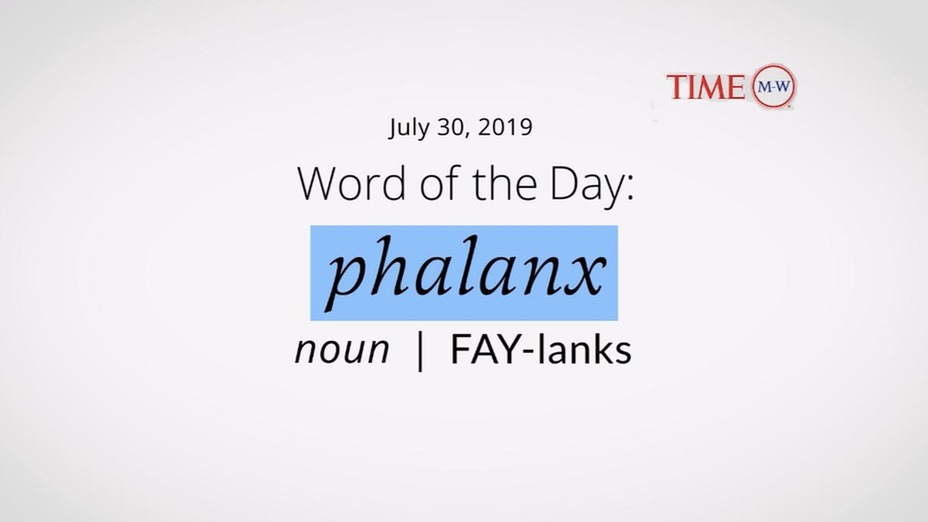 noun - an organized body of persons