GAMES BROWSE THESAURUS WORD OF THE DAY WORDS AT PLAY SETTINGS
Word of the Day : September 10, 2012

1 : a subtle distinction or variation

3 : sensibility to, awareness of, or ability to express delicate shadings (as of meaning, feeling, or value)

The history of "nuance" starts in Latin with the noun "nubes," meaning "cloud." "Nubes" floated into Middle French as "nue," also meaning "cloud," and "nue" gave rise to "nuer," meaning "to make shades of color." "Nuer" in turn produced "nuance," which in Middle French meant "shade of color." English borrowed "nuance" from French, with the meaning "a subtle distinction or variation," in the late 18th century. That use persists today. Additionally, "nuance" is sometimes used in a specific musical sense, designating a subtle, expressive variation in a musical performance (such as in tempo, dynamic intensity, or timbre) that is not indicated in the score.

The movie's dialogue didn't sound convincing, partly because none of the characters had mastered the nuances of a Midwestern accent.

"This Scavenger Hunt will be more difficult than earlier ones, and it is expected to bring you into some new corners. Sharp eyes are key, so if I were you, I'd start looking around now and memorizing every nuance in downtown Ocala."- From an article by Dave Schlenker on Ocala.com (Florida), August 9, 2012

What recent Word of the Day can be used to describe the moon when it is more than half illuminated but not full? The answer is ... 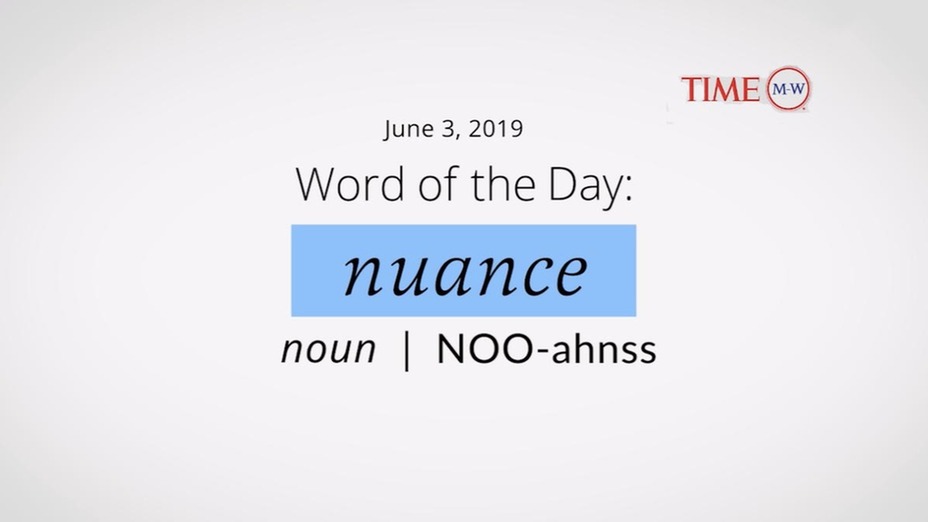 noun - a slight shade or degree of difference