: capable of being mixed; specifically : capable of mixing in any ratio without separation of two phases

"Miscible" isn't simply a lesser-known synonym of "mixable"-it's also a cousin. It comes to us from the Medieval Latin adjective "miscibilis," which has the same meaning as "miscible" and which derives in turn from Latin "miscēre," meaning "to mix." "Miscēre" is also the ultimate source of our "mix"; its past participle "mixtus" (meaning "mixed") spawned "mixte" in Anglo-French and Middle English, and "mix" came about as a back-formation of "mixte." The suffix "-able" gives us "mixable," thereby completing its link to "miscible." "Miscible" turns up most frequently in scientific discussions where it is used especially to describe fluids that don't separate when they are combined.

Mr. Remington's class demonstration showed that, to paraphrase an old saying, oil and water are indeed not miscible.

"Joseph is determined to make it on his own, and succeeds in inventing the first laundry detergent miscible in both oil and water." - From a book review by Wingate Packard in The Seattle Times, September 8, 2006

What is the meaning of "booboisie," our Word of the Day from July 16? The answer is … 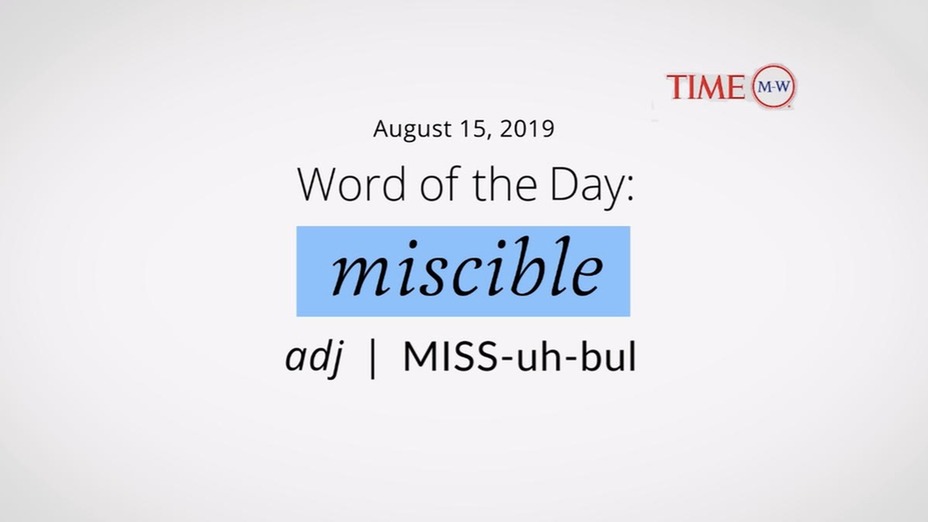 adj. - capable of being mixed