GAMES BROWSE THESAURUS WORD OF THE DAY WORDS AT PLAY SETTINGS
Word of the Day : August 3, 2012

: full of vigor and stamina : spirited

The 17th-century adjective "mettlesome" (popularly used of spirited horses) sometimes appeared as the variant "metalsome." That's not surprising. In the 16th century and for some time after, "mettle" was a variant spelling of "metal"-that is, the word for substances such as gold, copper, and iron. ("Metal" itself dates from the 14th century and descends from a Greek term meaning "mine" or "metal.") The 16th century was also when "metal"-or "mettle"-acquired the figurative sense of "spirit," "courage," or "stamina." However, by the early 18th century, dictionaries were noting the distinction between "metal," used for the substance, and "mettle," used for "spirit," so that nowadays the words "mettle" and "mettlesome" are rarely associated with "metal."

The mettlesome bronco kicked and bucked, but the rider kept her balance and rode her out.

"An accomplished actor, Prete writes electrifying dialogue, and his galvanizing descriptions are poetic and mettlesome." - From a book review Donna Seaman in Booklist, March 15, 2012

Fill in the blanks to create a word that means "lacking energy or spirit." lsls. The answer is ... 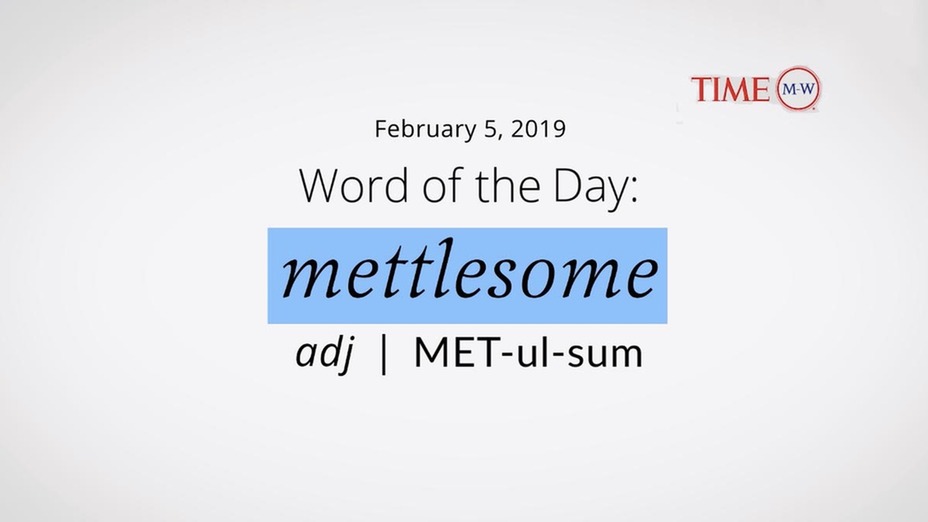 adj. - full of vigor and stamina