GAMES BROWSE THESAURUS WORD OF THE DAY WORDS AT PLAY SETTINGS
Word of the Day : July 31, 2019

1 a : to press or urge with troublesome persistence

b archaic : to request or beg for urgently

Importune has many synonyms—including beg, entreat, beseech, and implore. Beg suggests earnestness or insistence especially in asking for a favor ("the children begged to stay up late"). Entreat implies an effort to persuade or to overcome resistance ("she entreated him to change his mind"). Beseech implies great eagerness or anxiety ("I beseech you to have mercy"), and implore adds to beseech a suggestion of greater urgency or anguished appeal ("he implored her not to leave him"). But it is importune that best conveys irritating doggedness in trying to break down resistance to a request and the accompanying annoyance ("the filmmakers were importuning viewers for contributions"), as it has since Middle English speakers adopted it from Anglo-French.

"[Sarah] Polk feigned neutrality or loyalty, depending on what suited her, and she successfully importuned Andrew Johnson, the military governor of Tennessee and then American president, to pardon ex-rebels or to grant such favors as being able to sell her cotton untaxed." — Megan Reynolds, Jezebel, 3 June 2019

Unscramble the letters to create a synonym of importune meaning "to press with requests": EESEBGI. 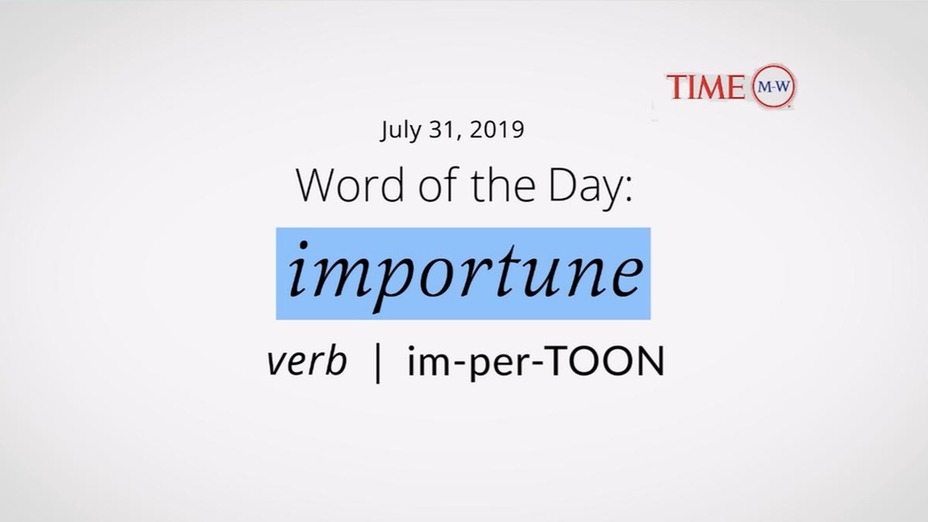 verb - to urge with troublesome persistence