GAMES BROWSE THESAURUS WORD OF THE DAY WORDS AT PLAY SETTINGS
Word of the Day : January 3, 2020

1 : the part of a sword or foil blade between the middle and point

2 : a minor flaw or shortcoming in character or behavior : weakness

In the 1600s, English speakers borrowed the French word foible to refer to the weakest part of the sword or foil, that part being the portion between the middle and the pointed tip. Despite the superficial resemblance, foible does not come from foil. The French foible was an adjective meaning "weak." (That French word, which is now obsolete, is derived from the same Old French term, feble, which gave us feeble.) The English foible soon came to be applied not only to weaknesses in blades but also to minor failings in character. It appeared in print with that use in the 17th century, and now the "character flaw" sense is considerably more popular than the original sword application.

"From family foibles to practical jokes to heritage-based barbs, we embrace it all with laughter and shrugs. Everybody's got skeletons in their closet; we might as well laugh." — Paula Brewer, The Bangor (Maine) Daily News, 22 Nov. 2019

"Stand-up comedians, those unvarnished truth tellers and astute observers of human nature, are funniest when they mine their own human foibles for laughs, with bonus points for relatability." — The Las Vegas Weekly, 20 Nov. 2019

Unscramble the letters to create a French-derived verb that means "to make feeble": EETTAIOL. 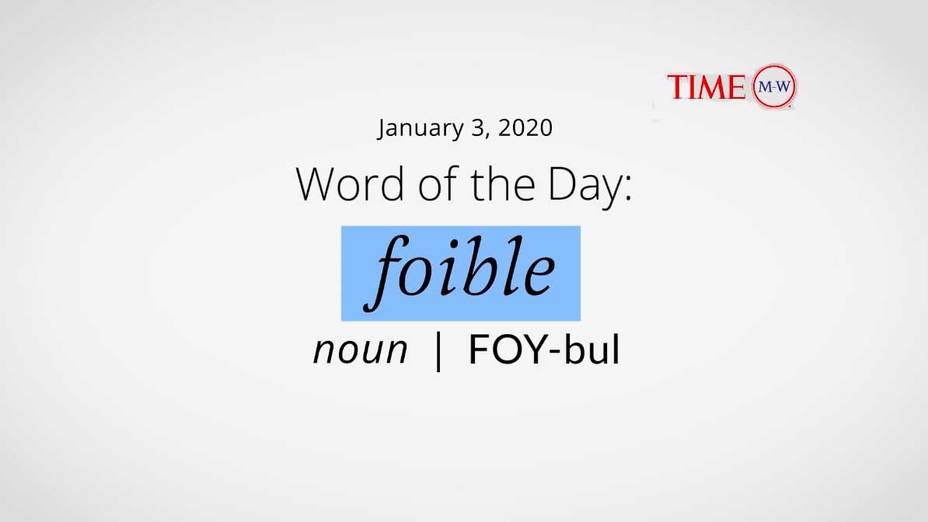 noun - a minor flaw or shortcoming