GAMES BROWSE THESAURUS WORD OF THE DAY WORDS AT PLAY SETTINGS
Word of the Day : February 28, 2020

1 : to influence or gently urge by caressing or flattering : wheedle

2 : to draw, gain, or persuade by means of gentle urging or flattery

3 : to manipulate with great perseverance and usually with considerable effort toward a desired state or activity

In the days of yore, if you made a "cokes" of someone, you made a fool of them. Cokes—a now-obsolete word for "fool"—is believed to be the source of the verb coax, which was first used in the 16th century (with the spelling cokes) to mean "to make a fool of." Soon, the verb also took on the kinder meaning of "to make a pet of." As might be expected, the act of "cokesing" was sometimes done for personal gain. By the 17th century, the word was being used in today's senses that refer to influencing or persuading people by kind acts or words. By the 19th century, the spelling cokes had fallen out of use, along with the meanings "to make a fool of" and "to make a pet of."

"Toasting the pine nuts until they're properly golden brown to the center and not just on the surface is key in coaxing out maximum flavor." — Molly Willett, Bon Appétit, December 2019/January 2020

"Recycling is still important, but it's not the whole answer to our problem with getting rid of 'stuff.' What we really need is to shut our eyes and ears to the advertising that coaxes us to buy more, and spend our money on only the things we really need." — Dorothy Turcotte, The Grimsby Lincoln (Ontario) News, 6 Jan. 2020

What synonym of coax rhymes with standish? 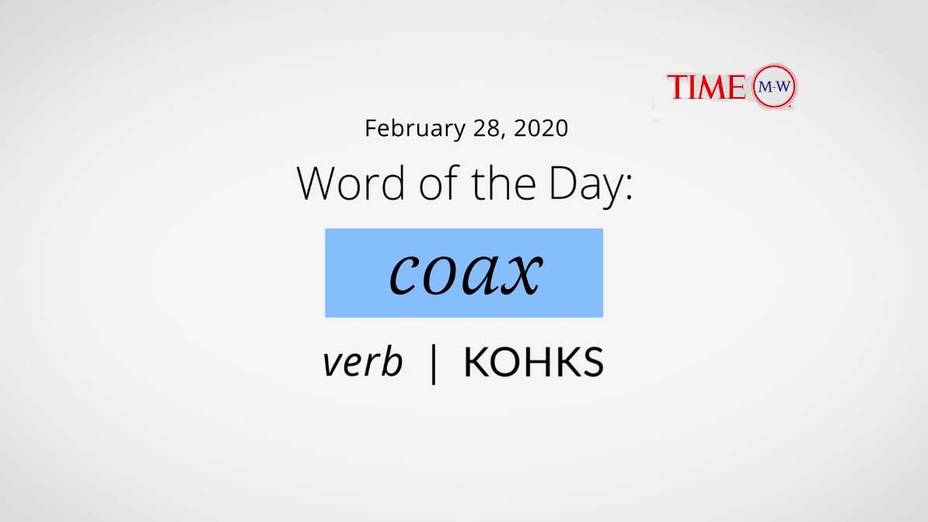 verb - to influence or persuade to do something