1 : to correct by punishment or suffering : discipline; also : purify

b : to cause to be more humble or restrained : subdue

If you say you would "castigate" or "chastise" someone in order to "chasten" them, you demonstrate a good knowledge of the origin of "chasten" -- all three verbs derive from the Latin verb "castigare," meaning "to punish." The trio shares an initial sense of "to subject to severe and often physical punishment," but all three verbs are now as likely to refer to a verbal dressing-down as a physical lesson. "Chasten" (which arrived in English via Anglo-French "chastier") can also be used to mean "to prune of excess, pretense, or falsity." This led to the more general sense of "to make more subdued," although the humility can be imposed by a humiliating situation as easily as by a strict taskmaster.

He was very arrogant as a younger man, but he has been sufficiently chastened by life's hardships and is now more cognizant of his own failings and weaknesses.

"Because good people do terrible things, humans rely on systems of justice and fairness and rules and regulations to chasten ourselves and mete punishment out to the guilty." -- From an article by Mark Matousek on The Huffington Post, June 14, 2011

What is the meaning of "refection," our Word of the Day from June 22? The answer is ... 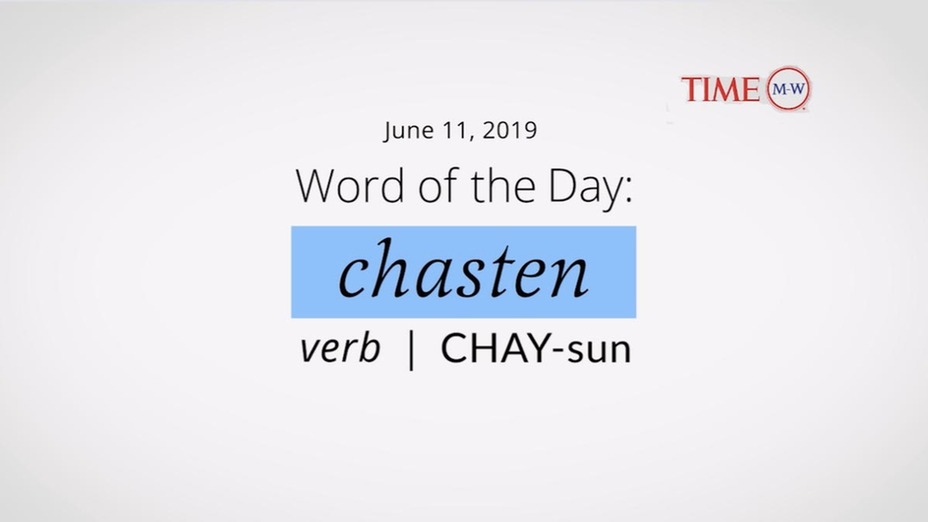 verb - to cause to be more humble or restrained