GAMES BROWSE THESAURUS WORD OF THE DAY WORDS AT PLAY SETTINGS
Word of the Day : February 6, 2020

1 a : a false or unfounded report or story; especially : a fabricated report

b : a groundless rumor or belief

2 : an airplane with horizontal stabilizing and control surfaces in front of supporting surfaces; also : a small airfoil in front of the wing of an aircraft that can increase the aircraft's performance

In 16th-century France, vendre des canards à moitié was a colorful way of saying "to fool" or "to cheat." The French phrase means, literally, "to half-sell ducks." No one now knows just what was meant by "to half-sell"; the proverb was probably based on some story widely known at the time, but the details have not survived. At any rate, the expression led to the use of canard, the French word for "duck," with the meaning of "a hoax" or "a fabrication." English speakers adopted this canard in the mid-1800s. The aeronautical sense of canard, used from the early days of flying, comes from the stubby duck-like appearance of the aircraft.

"Naysayers have been saying that theater is dying, of course, only since the moment it was born. And as a theater critic, I work to debunk that persistent canard." — Lily Janiak, The San Francisco Chronicle, 18 Dec. 2019

"NHL players can't play in the Olympics because—though contrary to every publicly available metric—the league continues to trot out the canard about how interrupting the season is injurious to teams' financial health. Yes, players can get hurt in midseason competition…. Players also get hurt in exhibition games, but the owners have never considered canceling those matches that in essence are meaningless." — Larry Brooks, The New York Post, 14 Dec. 2019 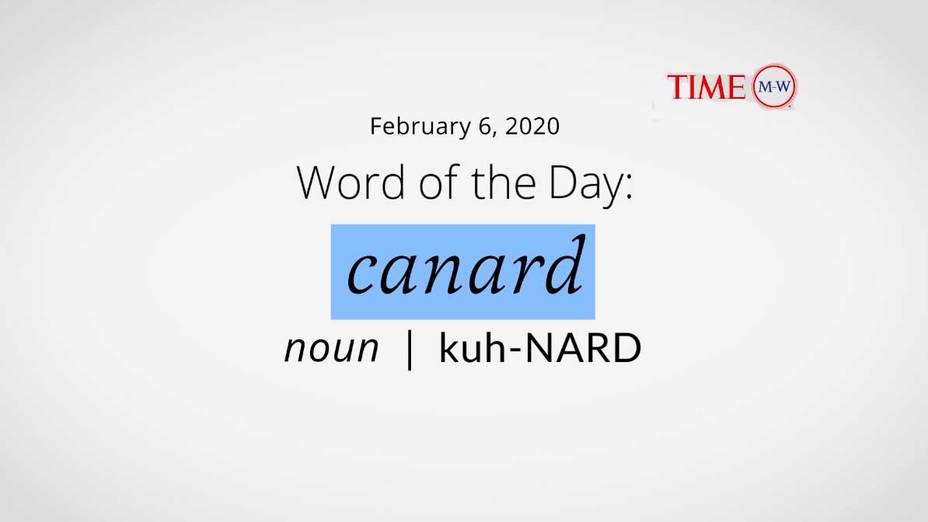 noun - a false report or rumor