GAMES BROWSE THESAURUS WORD OF THE DAY WORDS AT PLAY SETTINGS
Word of the Day : September 30, 2019

1 architecture : a projecting structure of masonry or wood for supporting or giving stability to a wall or building

2 : something that resembles a buttress: such as

a : a projecting part of a mountain or hill

c botany : the broadened base of a tree trunk or a thickened vertical part of it

3 : something that supports or strengthens

In architecture, a buttress is an exterior support that projects from a wall to resist the sideways force, called thrust, created by the load on an arch or roof. The word buttress was first adopted into English as butres in the 14th century. It came to us from the Anglo-French (arche) boteraz, meaning "thrusting (arch)," and ultimately derives from the verb buter, "to thrust." Buter is also the source of our verb butt, meaning "to thrust, push, or strike with the head or horns." Buttress developed figurative use relatively soon after its adoption, being applied to anything that supports or strengthens something else.

"The root system of one of the cedars has been hollowed out into a den, in which Neasloss finds black bear hair. One of the tree's buttresses has been chopped long ago by what he recognizes was a nephrite ax, the green jade axes that the coastal people used until 1846, when they adopted steel axes." — Alex Shoumatoff, Smithsonian, September 2015

"The modifications to Isabella [Dam] include raising the profile of the main and auxiliary dams 16 feet, adding buttresses and other safety features, and excavating 100 feet deep to build the huge spillway." — Steven Mayer, The Bakersfield Californian, 28 July 2019 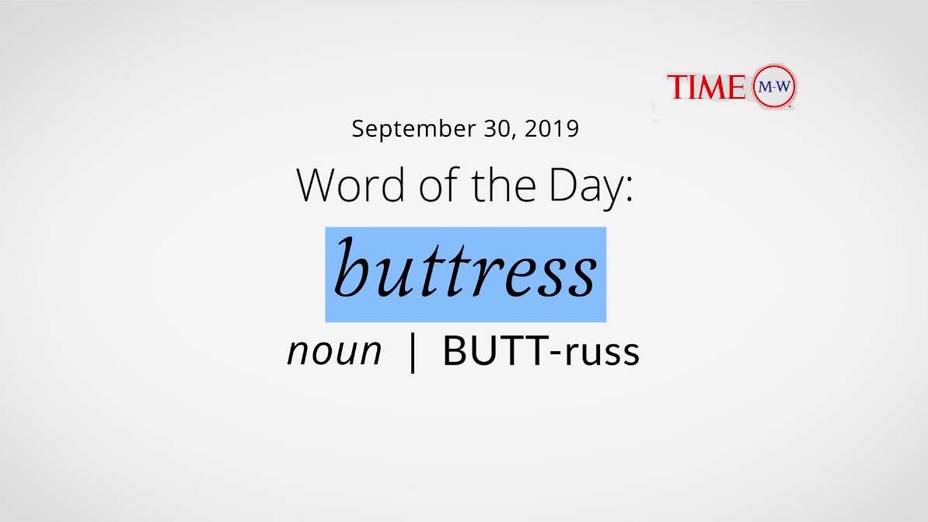 noun - something that supports or strengthens