plural unicorns
1
a
: a mythical, usually white animal generally depicted with the body and head of a horse with long flowing mane and tail and a single often spiraled horn in the middle of the forehead
b
: an animal mentioned in the Bible that is usually considered an aurochs, a one-horned rhinoceros, or an antelope
2
: something unusual, rare, or unique
There's the elusive unicorn: headphones that do everything well and work in any situation.—

Tony Paul
3
business : a start-up that is valued at one billion dollars or more
… a tech unicorn in Michigan is even more of a rarity, far from Silicon Valley's investor echo chamber.—

Scott Martin
The blockbuster initial public offering is expected to kick off a revitalized market this year, encouraging IPO debuts by other unicorns, the privately held start-ups whose hefty venture capital funds have allowed them to avoid Wall Street and the legal requirements of a public offering.—

Recent Examples on the Web At least one more erstwhile autonomy unicorn will go the way of Argo, folding without the legendary $10m/head acquisition of yore. —

Stefan Seltz-axmacher, Forbes, 24 Jan. 2023 Poopsie Slime Surprise is a brand of slime-pooping unicorn that currently retails for $100 to $300 on Amazon. —

Gene Maddaus, Variety, 20 Jan. 2023 Founders of consumer brands can still build meaningful businesses, even if becoming the next unicorn might be a harder reach. —

Paige Mcglauflin, Fortune, 11 Jan. 2023 While her exact version is like spotting a unicorn at this point, another options is Vans’ Viaje snowboard boots. —

Natalie Alcala, The Hollywood Reporter, 10 Jan. 2023 Writing a letter to L.A. County about owning a unicorn was Madeline's mom's suggestion. —

David Begnaud, CBS News, 5 Jan. 2023 In most of the world, that's the equivalent of stumbling across a unicorn that's holding a few winning lottery tickets in its teeth. —

John Timmer, Ars Technica, 31 Dec. 2022 That rate dropped to a pace of less than one new unicorn for every other business day in the third quarter of 2022, per CB Insights’ most recent analysis, the lowest since the first quarter of 2020. —

Catherine Thorbecke, CNN, 30 Dec. 2022 Sagan was once seen as the sport’s unicorn of versatility, a top sprinter who could also win stage races, soar over high mountains and cobblestones, and even win a mountain-bike race here and there. —

These example sentences are selected automatically from various online news sources to reflect current usage of the word 'unicorn.' Views expressed in the examples do not represent the opinion of Merriam-Webster or its editors. Send us feedback.

Middle English unicorne, from Anglo-French, from Late Latin unicornis, from Latin, having one horn, from uni- + cornu horn — more at horn

The Dictionary Just Got a Whole Lot... 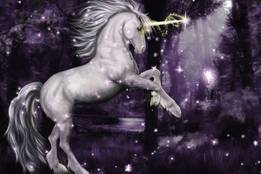 'Unicorn': Nothing Is What It Seems 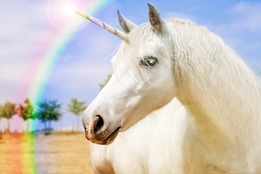 : an imaginary animal generally represented with the body and head of a horse and a single horn in the middle of the forehead

: having a single horn or hornlike process
a unicorn uterus

More from Merriam-Webster on unicorn