variants or less commonly show-runner or show runner
plural showrunners also show-runners or show runners
: a person who oversees the writing and production of each episode of a television series and has ultimate managerial and creative control over the series
A showrunner is more than just a producer. He or she is the creator or co-creator of a show and is a writer as well. These people are the guiding lights for a production. They are making decisions about casting, story arcs, as well as the day-to-day issues of getting a show done and ready for air.

Okla Jones, Essence, 22 Nov. 2022 Elan Gale serves as the series showrunner as well as one of its many executive producers.

Jordan Riefe, Los Angeles Times, 21 Nov. 2022 Those international and streaming rights became increasingly valuable as the series, developed for TV by first showrunner Frank Darabont, took off like a group of survivors fleeing the undead.

Emlyn Travis, EW.com, 16 Nov. 2022 For season two, Condal, who wrote or co-wrote four episodes of the first season including the premiere and finale, will serve as sole showrunner.

Brendan Morrow, The Week, 12 Nov. 2022 And Morgan’s job as showrunner and writer is not to rally for the late princess’s vindication, nor to scrub over her more unsavory sides.

These example sentences are selected automatically from various online news sources to reflect current usage of the word 'showrunner.' Views expressed in the examples do not represent the opinion of Merriam-Webster or its editors. Send us feedback.

1989, in the meaning defined above 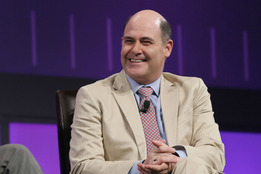 More than producer, more than writer

show/see (someone) to the door